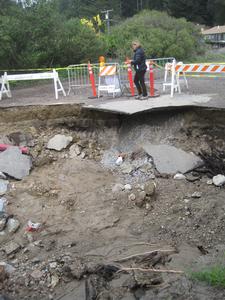 On February 6th, 2014 a series of storms delivered over 20 inches of rain on Mt. Tam and surrounding watersheds over four days. The highest intensity rainfall (up to about 0.8 in/hr at Middle Peak Mt. Tam) occurred on February 9th. This event caused Easkoot Creek, a coastal stream that goes through the community of Stinson Beach and NPS parklands, to overtop its bank and flood low lying areas of the community and NPS parkland. Exacerbating the flooding, a recently constructed sediment detention basin located on Easkoot Creek, was intentionally breeched under the direction of the Marin County Flood Control. The breeching of the berm containing the sediment basin caused high velocity flood flows to go through NPS parklands causing damage to NPS infrastructure including pedestrian pathways and the North Parking lot.

This project would repair the damages caused by the February 9th flood.

• Repair the erosion scarp in the north parking lot
• Re‐configure degraded dune at north parking lot
• Create a new flood discharge location
• Create a new access path to beach, including a new access corridor for dogs on leash to Upton Beach (Marin County)
• Repair pedestrian pathway
• Park repairs will be designed so as not to increase flooding in surrounding areas

The project referenced above was completed prior to the 2014/15 rainy season. Additional repairs are being done before the 2015/16 rainy season. Drawings and technical reports of these repairs can be found in the documents tab.