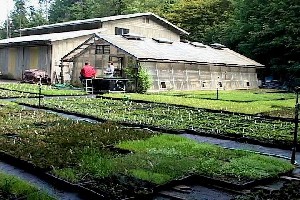 A Finding of No Significant Impact (FONSI) for the Environmental Assessment (EA) for the Olympic National Park Plant Propagation Facility was signed by Pacific West Regional Director Jon Jarvis on July 1, 2005.

The EA analyzed the effects of alternative strategies for replacing and upgrading the park’s greenhouse facilities, including a no action alternative.

The selected action is to locate the greenhouse and nursery within Robin Hill County Park, located off Dryke Road just north of Highway 101 between Port Angeles and Sequim. The 195-acre park provides day-use opportunities in an area of mixed forest, meadow and wetland. Twenty acres are maintained for pasture management. The National Park Service will work with Clallam County to implement alternative C-1, the northwestern site as described in the environmental assessment.

In addition, a temporary 2-acre acclimatization site will be located at Sweets Field through the life of the revegetation component of the Elwha River restoration project, through 2014.

The environmental assessment was available for a 30-day public review from March 25 to April 25, 2005. Thirteen comment letters were received, with general support for the project concept but mixed support of the proposed locations based on potential visual impacts and impacts to water resources. These comments were considered and reviewed by park staff and the county, and mitigation was added based on these comments. However, the EA was not modified and the determination of the impacts did not change.

County Commissioner Steve Tharinger remarked, “Having Olympic National Park's native plant nursery at Robin Hill Park is a great use of County resources and will give the public a chance to learn about this important program.”

Olympic National Park’s native plant propagation program is recognized as being one of the best in the Pacific Northwest. Since its beginning in 1987, it has produced over 400,000 native plants for revegetating damaged areas throughout the park including the Seven Lakes Basin, Lake Constance, Hurricane Ridge and several sites along the wilderness coast. The new greenhouse and nursery will provide an improved space for the park’s ongoing revegetation program, and for the upcoming Elwha restoration project. Once the Glines Canyon and Elwha dams are removed and the reservoirs drained, approximately 715 acres will be restored with native plants grown in the new greenhouse facility.

Construction of the new facility is expected to begin next spring.