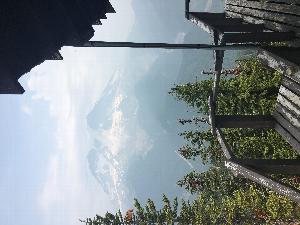 The National Park Service has completed its environmental review and issued its decision to permit the installation of lahar detection equipment within Mount Rainer National Park. At a height of 14,410 feet, Mount Rainier is the highest volcanic peak in the contiguous United States and has the largest alpine glacial system in the contiguous 48 states. As part of the Pacific Ring of Fire, Mount Rainier is an outstanding example of Cascade volcanism.

Mount Rainier is an active volcano with a history of large lahars (volcanic mudflows) that have previously impacted areas now populated both within and outside of Mount Rainier National Park. According to Pierce County, 2.5 million people live in the six drainages that may be affected by lahars from Mount Rainier.

The goal of the USGS Lahar Detection System proposal is to mitigate human risk by reducing the amount of time it takes for an alert to be sent out to potentially affected populations and communities after a lahar has been generated. The project will also increase the number of total drainage areas covered by the alert system to include the Tahoma Creek and the Nisqually River drainages, which along with the Puyallup River valley, are vulnerable to future landslide-caused lahars from Mount Rainier.

An additional benefit of the expanded monitoring system will be to improve detection capabilities for smaller debris flow events, particularly along Tahoma Creek which has experienced multiple debris flows since the late 1980s.  Five of the proposed monitoring sites were approved and installed in 2020 within developed areas of the park, bringing the total number of existing sites within the park to fifteen.

Some of the proposed locations include areas within suitable habitat for federally listed species pursuant to the Endangered Species Act (ESA). Species with the potential to be affected by the proposed installation and maintenance of new monitoring sites include the northern spotted owl (Strix occidentalis caurina) and marbled murrelet (Brachyramphus marmoratus). Measures to avoid impacts to whitebark pine (Pinus albicaulis), which is proposed for listing as a threatened species, are also included in the proposed action and alternatives.

An environmental assessment was prepared to analyze the effects of the proposed lahar detection and volcano monitoring system expansion at Mount Rainier National Park and to facilitate public review and comment in accordance with the National Environmental Policy Act (NEPA) and National Historic Preservation Act (NHPA).

Mount Rainier National Park protects more than 97% of its area as federally designated wilderness. The installation and maintenance of the proposed monitoring sites within the Mount Rainier Wilderness will require the use of helicopters to deliver and/or remove heavy equipment, and may be needed to deliver personnel if emergency repairs are needed during a time of year when safe access on foot is not possible. Use of motorized tools to install the monitoring sites is also proposed.

The Wilderness Act prohibits certain activities, including the use of motorized equipment and new installations within wilderness, unless these actions are determined to be necessary to meet the minimum requirement for administering the area for the purpose of wilderness. A final wilderness minimum requirement analysis has been prepared to evaluate the USGS proposed action and alternatives and is included as an appendix to the signed decision and Finding of No Significant Impact.