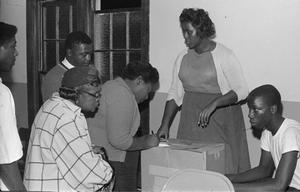 • The home in Jackson where civil rights activist Medgar Evers resided with his wife and was killed in 1963.
• Sites in the Mississippi Delta related to the lynching of 14-year-old Emmett Till on August 28, 1955, including Bryant's store and Tallahatchie County Courthouse.
• The Old Neshoba County jail in Philadelphia, Miss., where civil rights workers James Chaney, Andrew Goodman, and Michael Schwerner were held for a speeding violation prior to being released and murdered by a mob for registering black voters in 1964. The Reverends Martin Luther King Jr. and Ralph David Abernathy Sr. included the jail in a heralded voter registration march two years later.
• The Biloxi office of Dr. Gilbert Mason Sr. who was a principal organizer of "wade-ins" beginning in 1959 to desegregate Biloxi's public beaches. He also helped organize voter registration drives and led other civil rights initiatives for 33 years.

Other related sites in Mississippi not specifically listed in the legislation were identified and added to the list of potential study sites.

Based on this legislated directive, the National Park Service conducted a special resource study of nationally significant civil rights-related historic sites to determine the potential for the designation of a new national park unit in the state of Mississippi. The criteria used to determine eligibility for establishment of a potential unit of the national park system included: national significance, suitability and feasibility of inclusion within the system, and the need for NPS management. Please use the "Links" tab on the left to find additional information on the criteria used to evaluate new national parklands.

The purpose of this special resource study was to gather information about the sites through historical research and public input, and evaluate the sites' potential for inclusion into the national park system. Six public open houses were held in May 2018 throughout the state of Mississippi. To view the Public Scoping Report, please click on the "Document List" tab on the left side of this webpage.

At the conclusion of a special resource study process, the National Park Service, through the Secretary of the Interior, submits its findings to Congress. Congress then determines whether any Mississippi Civil Rights Sites should be added to the national park system. New units of the national park system can only be established by an act of Congress or by Presidential Proclamation.

The study was completed and transmitted to Congress for their consideration on December 21, 2022. Please click on the "Document List" tab for a PDF copy of the study and the transmittal letter to Congress.