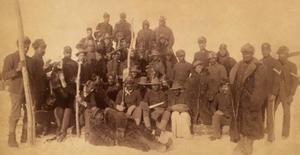 The National Park Service (NPS) conducted a study of alternatives to commemorate and interpret the role of Buffalo Soldiers in the early years of the national park system, recommend ways to enhance historical research, education, interpretation, and public awareness of their stewardship role in the national parks, and identify ways to further connect the Buffalo Soldiers story to the development of national parks and African-American military service following the Civil War. The NPS study team conducted public and internal outreach, including a Scholars Round Table, to: identify and fill research and knowledge gaps; gain a better understanding of the stewardship role of the Buffalo Soldiers in the NPS; and identify ideas and suggestions to meet the study's objectives. The NPS compiled its findings and completed the study. The document has been forwarded to Congress to consider further action.