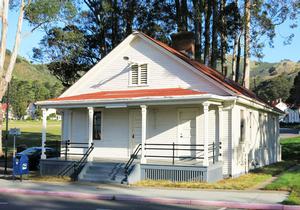 The Fort Baker Retreat Group (FBRG) LLC proposes a project that will rehabilitate historic Building 615, a small, 1-story wood frame former Army guardhouse, into a public-serving bakery cafe with kitchen addition as part of Cavallo Point, the Lodge at the Golden Gate.

Located at the intersection of Fort Baker's Murray Circle and Center Road, the building has been in the FBRG long-term leasehold since December 2006 but has remained unoccupied and unimproved since initial utilities and adjacent parcel landscaping were completed in conjunction with the opening of the larger project in Summer 2008. The project would reduce existing crowded kitchen facilities in Building 602 (aka the Murray Circle restaurant) by relocating all bakery functions from that structure, in addition to activating an important "gateway" building to the entire Lodge campus.

FBRG/Cavallo Point Lodge initiated consultations with GOGA Cultural Resources staff last year, in November 2014, to consider fundamental historic preservation and reuse challenges of the building, which retains its historic jail cell area as a character defining feature. FBRG has developed six (6) alternative treatments for the Building 615 program, based on comments from NPS park staff and CA SHPO. The alternatives are now included as supporting documents in this PEPC entry for comment.

The Lodge is seeking concept approval on the fundamental "new addition" element of the concept prior to launching into the more comprehensive multi-step design document process. These drawings show the range of alternatives developed and considered by the joint team, and why the "new addition" is proposed as acceptable under the Secretary of the Interior's standards despite the small size of the building. There is a history of sensitively-designed, purpose-built additions at Fort Baker and across the park; the Building 615-636 parcel in the Lodge leasehold was also designated in the approved Fort Baker plan and EIS (and the subsequent retreat and conference center RFQ/RFP) as a potential site for new construction.

A subsequent, multi-step design process by FBRG/Cavallo Point would complete due diligence and address related site/landscape, accessibility, environmental/public health, utility service, and important adjacencies, such as the unrehabilitated Building 636 and the planned rebuilding/relocation of a now-demolished air raid siren tower.