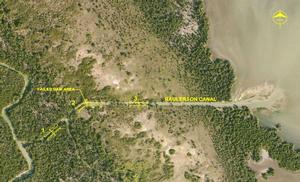 The NPS is planning to replace the failed plug at Raulerson Canal and repair the eroded plugs on House and Slagle Ditches in the Cape Sable area of Everglades National Park. The goal of this project is to reestablish the natural function of the marl ridge and restore natural ecological processes to the Cape Sable region by eliminating the unnatural exchange of salt and freshwater through the man-made canals.

The NPS encouraged public involvement throughout the National Environmental Policy Act process. The public and agencies had two opportunities to formally comment on the project. The first was completed during initial project scoping, a newsletter was sent out in February 2015 requesting public comment on the project objectives and the alternatives. The second was during the during the public comment period for the EA which lasted between April 24 and May 26 of 2016.

The approved FONSI is based on Alternative 2 for House and Slagle and Alternative 4a for Raulerson Canal, which were identified as the preferred Alternatives in the EA. Upon completion, the plugs are expected to function for a 50-year life cycle, natural and cultural resources will be protected, and safety hazards from the failed plug at Raulerson Canal will be removed. The plugs will also help to prevent illegal motorized boat access into the Marjory Stoneman Douglas Wilderness Area.

Copies of the EA and supporting documentation may be accessed and downloaded by clicking on the "Document List" link at the left side of this page. A limited number of copies on CD are available upon request by calling Amy Renshaw at (305) 224-4264. For further information, contact Carol Mitchell, Deputy Director of the South Florida Natural Resources Center at (305)224-4253 or by email at carol_mitchell@nps.gov.

Thank you for your interest in Everglades National Park.