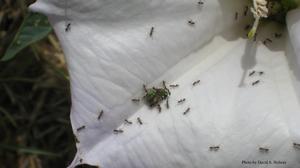 Non-native Argentine ants have spread significantly since their accidental introduction to Santa Cruz Island, thought to have occurred in the 1960s. Since their initial discovery in two locations in 1996, the ants have established in two additional locations and increased the size of each colony.

Although small, Argentine ants can be extremely numerous and have significant impacts because of their strong competitive ability and broad diet. Argentine ants impact the native invertebrate community through direct predation, competition, and interference. Native California ants are particularly vulnerable and are largely eliminated in the presence of Argentine ants. This impact has been observed on Santa Cruz Island

For these reasons, we have been working with researchers, governmental agencies, and non-profit organizations to develop methods to eliminate Argentine ants while minimizing short-term impacts to non-target species.