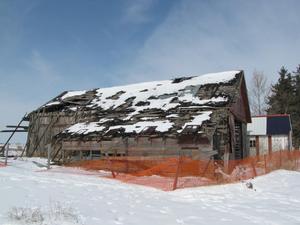 The Donald Thompson Hog Barn/Corn Crib is in an advanced state of deterioration and unfortunately needs to be removed. The structure is badly deteriorated, especially the hog barn section which has partially collapsed, and is a hazard. The structure was built probably before 1938 and was originally acquired by the park in 1974 under a life estate agreement. It came under full NPS control upon Mr. Thompson's death in 2008. As part of the life estate agrement Mr. Thompson was supposed to keep the buildings in good repair, but he failed to do so. The structure was declared eligible for the National Register of Historic Places in 1994.
In a 2008 discussion with Iowa SHPO representatives Doug Jones and Ralph Christian, it was agreed that the Hog Barn/Corn Crib (HS-86) was beyond repair, and that it could be removed, with salvaged lumber used to repair other Thompson Farm structures where feasible. This is what the park would like to do now with this building. Where feasable, lumber salvaged from this structure will be used as part of repairs planned in PEPC 40045, Stabilize Thompson Farm Structures. .
Future plans call for the Thompson Farm to be converted into the park's maintenance facility. As part of those plans HEHO will explore putting a similar-looking structure at the HS-86 site. The current structure's concrete pad will be retained, with the possibility that it will be reutilized when site is re-developed