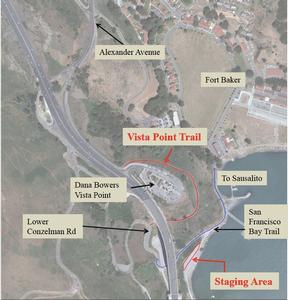 Update: 5/5/16
The Vista Point Trail Project is available for review and public comment through June 4, 2016, via this project page (see "Open for Comment" tab on left hand side of page). Comments may also be submitted by mail:

The public is invited to attend a public meeting about proposed improvements:


PROJECT SUMMARY
The National Park Service proposes improvements to the Vista Point Trail at Fort Baker to provide an important trail connection for pedestrians and bicyclists from the north side of the Golden Gate Bridge to Fort Baker and Sausalito. The project would convert a closed trail segment to a multi-use trail to provide a safer and more scenic route that is free of cars.

The anticipated project converts the closed Vista Point Trail to a pedestrian and bicycle multi-use trail connecting the Dana Bowers Vista Point at the north end of the Golden Gate Bridge with Fort Baker. Vista Point Road, a historic road from the late 1800s, provided non-motorized public access until 1999, when it was closed for the Golden Gate Bridge Seismic Upgrade. Public use then diverted onto the heavily used Alexander Avenue. The Golden Gate Bridge's Seismic Upgrade has been completed, allowing NPS to re-open the route for public use. NPS has been working closely on the project with the Golden Gate Bridge District, Caltrans, the Association of Bay Area Governments' The Bay Trail Project, and the City of Sausalito. This project has been presented to the public at NPS Open Houses in Marin and San Francisco in 2012 and 2014, and at the City of Sausalito City Council in 2014 and 2016.

The purpose of the project is to improve and reopen a trail for public use, which will reduce vehicle-bicycle and vehicle-pedestrian conflicts on Alexander Avenue. Thousands of cyclists and many pedestrians who travel each day on Alexander Avenue will have the opportunity to travel on a car-free route between the Golden Gate Bridge and Fort Baker. The route extends from the Vista Point, travels around a hillside, and passes under the Golden Gate Bridge into Fort Baker.

The project as envisioned would provide a paved 15 foot wide trail, consisting of an 8' wide downhill bicycle lane and a 7' wide shared uphill bicycle and pedestrian lane. The running slope of the trail will be between 7% and 10%. Four rest areas will be provided along the trail, and railings and low retaining walls will be placed as needed. Signs and security measures would prevent vehicles from accessing the trail. Existing drain inlets and drain lines would be replaced, and one additional drain line would be added.

The construction staging area plans to be in Fort Baker on Moore Road. All construction activities are anticipated to occur on week days, 10 hours per day. Impacts from the project are anticipated to be minor and temporary. The project incorporates practices to reduce impacts to resources, such as erosion control and revegetation, to mitigate contamination in the trail alignment and to protect nesting birds. No sensitive plant or animal species are present within the construction corridor, including host plants for the federally-endangered Mission Blue Butterfly. Visual impacts from Fort Baker to the historic road would be mitigated with native vegetation. Current public-access trails and roads would remain open, and safety measures for construction traffic would be incorporated. Construction would take up to 6 months to complete.