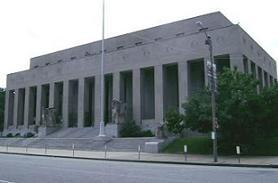 On behalf of the Soldiers' Memorial Military Museum Special Resources Study team, I would like to thank you for your interest in the study and your participation in the study process. We have concluded our study of the memorial, and it has been presented as a report to Congress. If you would like to read the full report, click on "Documents" to the right, and select "Soldiers' Memorial Military Museum Special Resource Study."

The National Park Service was directed by Congress in Public Law 110-229 to evaluate the Soldiers' Memorial as a potential unit of the national park system. For a site to be recommended as a potential new park unit, it must meet the criteria for national significance, be a suitable and feasible addition to the park system, and NPS must be found to be the best option for management.

The Soldiers' Memorial Military Museum was completed in 1938 as a memorial to the St. Louis, Missouri area citizens who gave their lives in World War I. Following the war, patriotism and an inability of relatives of the fallen to visit foreign graves led to memorials throughout the country. Some were purely memorial structures; others were functional as well, such as stadiums and museums. The Soldiers' Memorial concept of a memorial museum in a park setting was proposed in 1919 and adopted by the City of St. Louis in 1923. This project was intended not only to memorialize the lost, but also to remake a central area of the city following the principles of the City Beautiful urban planning movement. The neoclassical Soldiers' Memorial displays artifacts of the personal experiences of St. Louis area service members in all wars, is a focal point for the area veterans' community, and has been the setting for events of remembrance since its opening.

The study found the Soldiers' Memorial Military Museum to be a fine example of neoclassical architecture, the City Beautiful urban planning movement, and the ideal of war memorialization as conceived in the period between the World Wars. However, scholarly research and peer-reviewed analysis determined that while the Soldiers' Memorial Military Museum has local and regional importance and excellent historic integrity, it does not rise to the level of national significance for representation of these themes.

We appreciate your involvement and interest in this study. We hope it will be foster better understanding of the historic and architectural context of the Soldiers' Memorial Military Museum, and be a useful tool for planning its continued preservation, interpretation, and service to the community.