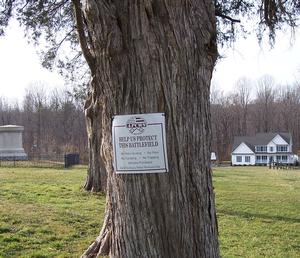 The Nation's Civil War Battlefields: An Update to Congress

**The public comment period is now closed. For those who submitted comments between September 12 and October 19, 2012, thank you for taking time to examine the draft report and providing feedback. The NPS will consider fully all comments provided.**

Congress has directed the Secretary of the Interior, acting through the American Battlefield Protection Program (ABPP) of the National Park Service, to review site conditions at Civil War battlefields across the country. The resulting draft report looks at changes to the historic landscapes since 1993 and preservation activities at the battlefields. It also proposes new protection recommendations based on two decades of battlefield preservation practice. Supplemental state-by-state reports provide additional details about individual battlefields and specific issues that affect them (available online at http://www.nps.gov/history/hps/abpp/CWSII/CWSIIStateReports.htm).

The intent of this update is to help focus the efforts of an active Civil War community and provide useful information to federal, state, and local officials responsible for making land use decisions about historic Civil War battlefields. The ABPP invites the public to provide comments about the draft report and its recommendations. The comment period begins September 12, 2012, and ends October 12, 2012. **NOTE--Due to systemwide server issues last week, the comment period is extended to October 19, 2012.**