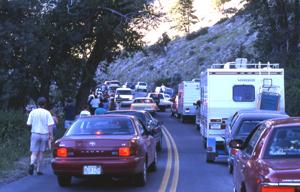 The National Park Service, in cooperation with the Federal Highway Administration, has completed a plan and environmental assessment to reconstruct a 25.6-kilometer (15.9-mile) segment of the Grand Loop Road between its intersection with the Norris campground road, and north to a point just north of Swan Lake Flats, in an area known as Golden Gate. The project will reconstruct the road, associated parking areas and turnouts, and bridges. Construction of the first phase of this project is scheduled to begin as early as 2014.

A Finding of No Significant Impact (FONSI) was signed by the Regional Director of the Intermountain Region on October 21, 2011.

Reconstruction of this road will allow needed improvements to occur. The project is needed in order to establish a road that meets acceptable engineering safety standards to provide safe and pleasant driving experiences, to facilitate park operations and emergency services, to improve resources protection, and to enable more efficient use of park funds.

The project is part of the Yellowstone National Park road reconstruction program. The source of funding for this program is the Federal Lands Highway Program (FLHP) as a part of the Highway Trust Fund. The Yellowstone National Park road reconstruction program is a partnership effort between the National Park Service (NPS) and the Federal Highway Administration (FHWA) and was initiated at the request of the park. The FHWA is an official cooperator in this project. The Parkwide Road Improvement Plan and Environmental Assessment, approved in June 1992, describes the general scope of the entire program.

The selected action is described as "Alternative B" in the environmental assessment. The selected action would reconstruct the road to a 30-foot paved width (an increase from its current 19-22' width), including the rehabilitation/reconstruction of three bridges. The selected action would also resource issues at Frying Pan Spring, Semi-Centennial Geyser, and the road curve just north of Grizzly Lake Trailhead, by shifting the road alignment. The project would also increase parking spaces and the number of turnouts at various locations along, or near, this road segment.