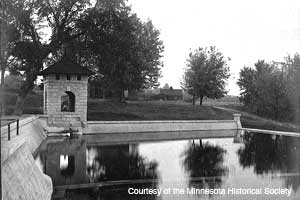 The 30 day no-action period for the Final Environmental Impact Statement ended January 11, 2010. A Record of Decision (ROD) was issued and signed by the National Park Service Midwest Regional Director for the Secretary of the Interior on January 15, 2010.
The ROD confirms the Department of Interior's selected action is the preferred alternative D, land use scenario Open Space / Park. The property will remain under federal ownership, some or all of the Bureau of Mines buildings and infrastructure will be removed, and the site redeveloped as open space/park. The record of decision was also used to officially announce the transfer of management authority to the National Park Service.
The ROD outlines the rationale used to reach this decision, summarizes all the alternatives analyzed in the EIS, identifies the environmentally preferred alternative, addresses measures to minimize environmental harm and summarizes pubic and agency involvement in the EIS process. The ROD conclusion states:
"The Department has selected the preferred alternative, Alternative D, Modification of Land,
Structures or Other Improvements by the Federal Government Prior to Conveyance or Retention
of the Center, with the land use scenario Open Space / Park, for the final disposition of the
Center property, as described in the Final EIS. In addition, the Department has determined that
the future management authority will be transferred to the National Park Service. The selected
alternative represents the alternative that best meets national environmental policy goals
(environmentally preferable), Department and NPS policy and management objectives, and
balances the public interest in the Center property. The selected alternative will not result in the
impairment of resources and values as defined by NPS policy."
A media news release was issued on January 20, 2010 by MNRRA announcing the signing of the record of decision.