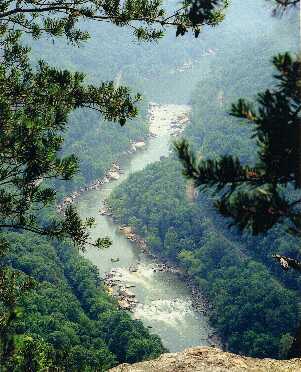 This site contains information and public review documents related to the preparation of the General Management Plan(GMP) and Environmental Impact Statement(EIS) for New River Gorge National River. The GMP is the foundation for decision-making in the park. The purpose of the GMP is to ensure that the park has a clearly defined direction for resource conservation and visitor use.

The Draft General Management Plan/Environmental Impact Statement presents five alternatives for management of New River Gorge National River and the environmental consequences of each alternative. The Foundation Plan identifies the park resources and values that are "fundamental" to achieving the park's purpose and significance and the legal and policy requirements that mandate the park's basic management responsibilities.

The Draft GMP/EIS was available for public review from January 13, 2010 through April 16, 2010. Approximately 300 CD/paper copies of the document and over 550 postcards announcing availability of the plan were distributed to interested individuals, agencies, and organizations. Paper copies were also available for review at the parks' Headquarters, Canyon Rim and Sandstone Visitor Centers, and three local libraries. An electronic version was posted on the NPS Planning, Environment, and Public Comment (PEPC) website. Public open houses were held on March 9, 10, and 11, 2010 in Hinton, Beckley, and Fayetteville, WV, respectively. Press releases in three local newspapers and the parks' nps.gov homepage announced the availability of the document, as well as the public open house dates and times. A total of 35 individuals attended the public open houses. The NPS received 77 pieces of correspondence on the draft plan.

An Abbreviated Final GMP/EIS was prepared and released to the public September 27, 2011. The Abbreviated Final GMP/EIS includes a detailed comment analysis with NPS responses and also includes errata sheets with a number of editorial and factual corrections. An abbreviated format was used because comments received during the public review period required only minor responses and editorial changes to the Draft GMP/EIS. There were no changes to the alternatives or the impact analysis presented in the Draft GMP/EIS. Alternative 5 remained the NPS preferred alternative. Using the abbreviated format allowed the production of a simple brief document and avoided the costly reprinting of the entire 900-page draft document. Press releases in the local newspapers and the parks' nps.gov homepage announced the availability of the document.

To learn more about the planning process, please click on "Plan Process". To view copies of the Draft GMP/EIS, the Abrreviated Final GMP/EIS, or the Record of Decision, click on "Document List".

Thank you for your continued interest and participation in the GMP planning process at New River Gorge.