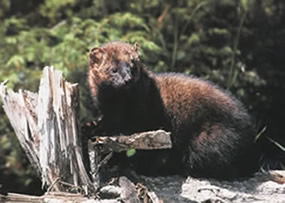 Seven fishers were released March 2 at remote sites within the Elwha Valley of Olympic National Park, joining the 11 animals that were reintroduced in late January. The 18 animals (6 males and 12 females) now living in the park are the first fishers to roam the state of Washington since the mid 1900s; the result of a multi- partner effort to restore this reclusive mammal to the state of Washington.

In the five weeks following the first fisher release, biologists from the National Park Service, Washington State Department of Fish and Wildlife and U.S. Geological Survey have monitored the animals' movements at least once a week by tracking signals from the tiny radio transmitters carried by each animal. Although efforts were hampered by poor flying conditions in early February, scientists have successfully located ten of the 11 fishers that were released in late January. Interference from a nearby weather station has made it difficult to detect the eleventh fisher's signal.

During the most recent tracking flight on February 26, biologists located nine animals. All are alive and continuing to explore their new home, spending most of their time within Olympic National Park and some time in adjacent Olympic National Forest lands. The average distance moved in the seven days since the last flight was about two and a half miles, less than the distances recorded in previous weeks. Several animals have also been tracked from the ground, allowing scientists a more in depth understanding of their movement patterns.

"With yesterday's release and very positive radio tracking results, we continue to move forward in restoring fishers to the park and the state," said Olympic National Park Acting Superintendent Sue McGill. "Weather permitting, weekly monitoring of the new fisher population will carry on throughout the year and results will be available on our website in the near future."

About the size of a house cat, fishers are members of the weasel family and are related to mink, otter and marten. They are native to the forests of Washington, including the Olympic Peninsula, but vanished from the state decades ago because of over-trapping in the late 1800s and early 1900s and habitat loss and fragmentation. Fishers were listed as a state endangered species in 1998 by the Washington Fish and Wildlife Commission and were designated as a candidate for federal listing in 2004 by the U.S. Fish and Wildlife Service under the Endangered Species Act.

Restoration of fishers to Washington and Olympic National Park is the result of a strong and diverse alliance including federal and state agencies along with nonprofit partners. The Washington Department of Fish and Wildlife and the National Park Service are co-leading the project while the U.S. Geological Survey and U.S. Fish and Wildlife Service are instrumental partners in supporting both the transport of fishers from British Columbia and post-release monitoring. Olympic National Forest is also cooperating on the project. Non-profit partner Conservation Northwest has and continues to provide vital funding for the project and Washington's National Park Fund has pledged financial support for monitoring the reintroduced fisher population.

"The ongoing monitoring effort is critical to helping us understand the role these animals play in our old-growth ecosystem, and we are really pleased to be involved with it," said Mitch Friedman of Conservation Northwest.

Fisher reintroduction to Olympic National Park was examined in an environmental assessment released in September 2007. Nearly 200 comments were received and a Finding of No Significant Impact was completed in November 2007.