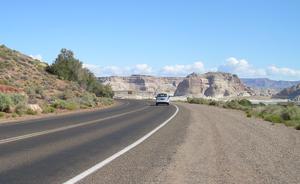 The National Park Service (NPS) has approved a Finding of No Significant Impact (FONSI) for the planned rehabilitation of Lakeshore Drive in Glen Canyon National Recreation Area (Glen Canyon). The project area is located just north of the Glen Canyon Dam near Page, Arizona. Other than a small portion in Kane County, Utah, the project is located in Coconino County, Arizona.

This project is expected to be implemented in phases. During the six months of Phase 1 road rehabilitation tentatively planned for the winter and spring of 2015/2016, the NPS proposes to close the South Entrance and Lakeshore Drive. During this time, access to the Wahweap Marina area will be through the North Entrance. Low power lines will be placed underground to allow large trailered houseboats to use this route. Some of the Wahweap area roads along this route will be temporarily converted to a one-way loop to accommodate the passage of large vehicles and vessels.

An Environmental Assessment (EA) has been prepared in compliance with the National Environmental Policy Act (NEPA) to provide a decision-making framework that 1) analyzes a reasonable range of alternatives to meet project objectives, 2) evaluates potential issues and impacts to park resources and values, and 3) identifies mitigation measures to lessen the degree or extent of adverse impacts. The project also complies with Section 106 of the National Historic Preservation Act and all other applicable laws and regulations.