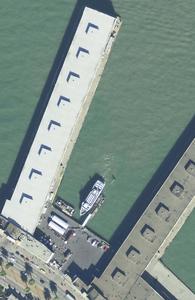 Golden Gate National Recreation Area completed the Record of Decision (ROD) for the Alcatraz Ferry Embarkation Plan/Environmental Impact Statement on January 11, 2018, selecting Pier 31½ as the site for passenger ferry service, coupled with actions to rehabilitate the historic property. The ROD and Determination of No Impairment (DNI) can be downloaded at the Documents List link to the left.

The National Park Service has completed the Alcatraz Ferry Embarkation Final Environmental Impact Statement (EIS) for establishing a long-term ferry embarkation site for passenger service between the northern San Francisco waterfront and Alcatraz Island, and special limited ferry service between the Alcatraz ferry embarkation site and the existing Fort Baker pier, and interpretive cruises to Golden Gate National Recreation Area (GGNRA) parklands around the San Francisco Bay. This action would create an identifiable, adequate, and quality visitor welcome and support area that connects visitors to the history of Alcatraz Island, other GGNRA sites, and orientation to the national park system in general. This action is needed because the NPS concession contract for water transportation services between San Francisco and Alcatraz Island has been subject to location changes every 10 years, which has led to visitor confusion, community concerns, and inconsistency in visitor support services, and the existing site is constrained by lease provisions.

The Final EIS evaluates the same four alternatives as those in the Draft EIS, including the No-Action Alternative. The National Park Service identified Pier 31½ Alternative as the Preferred Alternative in the Final EIS. The Preferred Alternative would retain Port Pier 31½ (the wharf between Piers 31 and 33) along the Embarcadero for long-term ferry service. This alternative includes retrofitting the existing structures, including portions of Pier 31 and 33 sheds and bulkhead buildings and constructing a third berth to support ferry travel to other Golden Gate National Recreation Area (GGNRA) sites. The Preferred Alternative would also establish special connecting ferry service between the selected embarkation site and the existing Fort Baker pier in Sausalito. The Final EIS also addresses substantive comments received on the Draft EIS.

The planning process followed requirements of the National Environmental Policy Act (NEPA) and the National Historic Preservation Act (NHPA). Consistent with NEPA, and in coordination with the regulations for implementation of NHPA, the National Park Service will execute a Record of Decision (ROD) no sooner than 30 days following publication of the Notice of Availability of the Final EIS in the Federal Register by the Environmental Protection Agency. The ROD will also be published in the Federal Register and available on this web site. The National Park Service will continue to engage the public with timely information on future planning and design.

Questions regarding this project may be directed to Brian Aviles, GGNRA at 415-561-4942. The Final EIS can be downloaded from this website (click on Document List on the left).