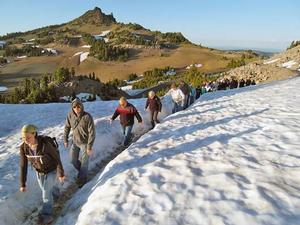 Please refer to the attached newsletter for a detailed description of the potential proposed actions for the Crater Lake Trail System, as well as two park maps illustrating where those actions could occur.

Crater Lake National Park is asking for public feedback on the proposed actions from January 31, 2017 to March 1, 2017. To comment, please respond to the three questions below.

Thank you for your interest and participation!