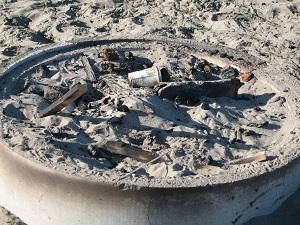 Update [2/22/18]:
Posters and a copy of the slides presented at the February 2018 North Ocean Beach Public Meeting can be found at the "Document List" link to the left.

Update [2/21/17]:
Posters, materials, and an outline of the presentation provided at the February 2017 Public Open House can be found at the "Document List" link to the left.

Update [2/7/17]:
Please join us Thursday, February 16, 2017 at an Ocean Beach Fires Public Open House for an update and discussion on the program where we'll share information about the past burn season and highlight what you can look forward to in the upcoming season. See the "Meeting Notices" link to the left for details.

San Francisco Recreation & Parks Department (SFRPD) will assist with maintenance, solid waste collection, public education, and outreach as part of the final program. SFRPD's continued assistance of the Ocean Beach Fire Program is enabled by the generous support of San Francisco District One Supervisor Eric Mar and the City and County of San Francisco.

There is a long tradition of beach fires on Ocean Beach predating the lands transfer of Ocean Beach to the Golden Gate National Recreation Area (GGNRA) in 1975. Pilot Beach Fire Programs were implemented by the NPS in 2007 and 2014 to address outstanding concerns. Despite efforts to increase conformance to rules, NPS continues to have ongoing issues and concerns regarding public safety, visitor experience, NPS staff safety, park operations, and air quality.

The final program has been developed following a 44-day period of public review and comment on the proposed program, during which 508 comments were submitted. The NPS made a number of changes based on public comment and the final program extends the fire curfew to 9:30pm, expands the number of available fire rings from 12 to 16, and will not require permits for groups of fewer than 25 people. The final program will allow beach fires for eight months, a Burn Season of March through October, which avoids burning during the Bay Area Air Quality Management District's (BAAQMD) Winter Spare the Air season. The NPS will also be hosting annual public workshops in coordination with partners, stakeholders, and interested public to evaluate the program, share information, discuss what's working and what's not, and to chart a course together for the next burn season.

Questions regarding the Final Ocean Beach Fire Program can be sent to: