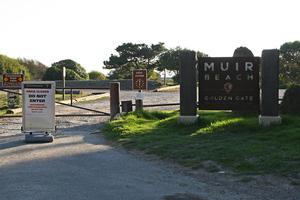 On November 7, 2007 the Cosco Busan container ship struck one of the support towers for the Bay Bridge puncturing the vessel and spilling over 53,000 gallonls of fuel oil into the Bay. The oil impacted the water and shorelines in the central Bay and outer coast resulting in widespread beach closures and interruption of recreational activities.

NPS has received a settlement of approximately $9.75 million to compensate for lost recreational uses in San Francisco and Marin counties. Projects to be funded by these settlement funds are intended to compensate the public for the loss of use and enjoyment of beaches, shorelines and other public or natural resources located within NPS park units. NPS park units that were affected by the spill include Golden Gate National Recreation Area, Point Reyes National Seashore and San Francisco Maritime National Historical Park. Projects are expected to focus on shoreline recreation, fishing, boating and other water-based recreation. Of the $9.75 million, approximately $2.5 million is to be spent in Marin County and $7.25 million in San Francisco County.

The Cosco Busan Trustee Council, comprised of representatives of the Department of the Interior (DOI), the National Oceanic and Atmospheric Administration (NOAA), the California Department of Fish and Game (CDFG) and the California State Lands Commission (CSLC), oversees and manages the use of monies recovered for impacts to the public's natural resources, including final selection of projects and oversight of project implementation.

Potential projects will be evaluated based upon how well they meet the following criteria:
• benefit recreational resources similar to those affected by the Cosco Busan spill
• comply with applicable laws
• are cost effective
• provide a broad range of recreation benefits
• begin benefiting the public in the short-term
• provide benefits to the public over the long-term
• have adequate provisions for maintenance and oversight
• avoid collateral injury from project implementation
• have a high likelihood of success
• contribute to a comprehensive suite of funded projects
• have a complete and accurate estimate of project costs
• are beneficial to public health and safety
• provide opportunities for collaboration
• prevent any future injury that may be associated with the Cosco Busan spill
• avoid duplication of other efforts already ongoing at the same location

Projects that are not technically feasible, or are otherwise not expected to provide tangible benefits to recreational fishing, recreational boating, other water-based recreation, and/or shoreline recreation will not be considered.

The NPS has been working on developing a list of potential recreational use projects to implement with Cosco Busan settlement funds and is focusing first on identifying a suite of projects in Marin County. This list was developed through outreach to park staff, park partners and user groups. In mid-August we requested detailed project descriptions and cost estimates for all proposed Marin projects and a few low cost San Francisco projects that met the threshhold criteria for consideration. After reviewing and rating these projects the NPS will present a recommended list of Marin projects at the September quarterly open house public meeting in Marin. Once the list of potential projects in Marin has been finalized, the NPS will present them to the Trustee Council for concurrence. We expect to begin implementing projects in Marin and a few small projects in SF in 2013. In late fall 2012, we will begin focusing on identifying projects for implmentation in San Francisco County, doing similar outreach to park partners, user groups and the public.