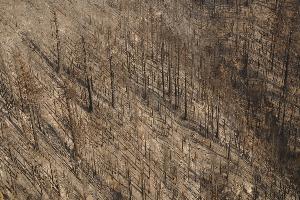 Reforestation of Board Camp Sequoia Grove After High Severity Fire

The National Park Service (NPS) is proposing to plant seedlings of giant sequoia (Sequoiadendron giganteum) within areas which burned at high intensity and severity during the 2020 Castle Fire in Sequoia National Park.

The NPS has collected sequoia cones from Board Camp and nearby groves and is proposing to plant them in Board Camp grove as a pilot project in fall of 2022. In addition, the NPS is proposing that a small number of seedlings from seed collections held by a United States Forest Service Placerville nursery be planted in a select area to test for potential benefits of including drought-adapted sequoia seedlings.

The proposed action includes growing sequoia seedlings from collected seed, flying in the seedlings via helicopter to the remote Board Camp grove, and planting 12,000 sequoia seedlings in the fall, just prior to winter precipitation. Given the location, roughly seven miles off-trail in remote wilderness, watering and post-planting care is not planned at this time. Seedlings would be monitored for percent of survivorship the following fall. Additional seedlings may be planted if the pilot is deemed successful, or different methods may be employed the following year. The NPS anticipates that planting would occur in October 2022 and may occur again in 2023.

Additional information on the NPS proposed action is available in the "documents" section of this project website.

Board Camp giant sequoia grove is in steep, remote wilderness within Sequoia National Park. It was rarely visited by the public due to its difficult and inaccessible terrain, but it included 48 acres of giant sequoia mixed conifer forest.