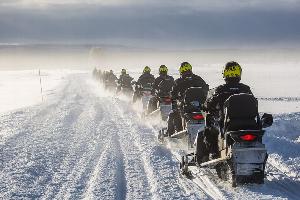 MAMMOTH HOT SPRINGS, WY - - The National Park Service (NPS) encourages public comment on a proposal to suspend one component of the adaptive monitoring plan for winter use, which was initially put in place to evaluate effects to resources in relation to snowmobile and oversnow vehicle (OSV) use. Starting in the winter of 2021 and 2022, a wildlife monitoring effort that was identified in the 2012-2013 Winter Use Plan and Supplemental Environmental Impact Statement (SEIS) / Record of Decision (ROD) would be suspended given the results have not substantially changed over the decade evaluated. This action would not affect snowmobile or OSV use in the park or impact visitors. This action is also consistent with the park's Winter Use Adaptive Management Plan, which stated the NPS would continually re-examine and adjust winter use monitoring strategies, and management actions as new information became available.

Wildlife monitoring has consistently shown similar response levels over the years, indicating that wildlife are not, or are minimally, impacted. Wildlife response to OSVs will likely continue to follow observed patterns from the last 20 years of observation. In the future, the park may explore other methods for monitoring wildlife impacts.

A recent summary report combined findings from the winter monitoring programs since the 2012-2013 Winter Use Plan and SEIS/ROD was put into effect. This summary report found that:

The full report is available under the "Document List" tab on this page. If you wish to comment on this proposal, navigate to the "Open for Comment" tab on the left of your screen. Comments must be received by October 31, 2021.