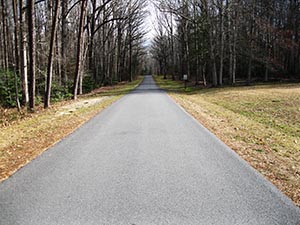 Today, the National Park Service maintains approximately 30 miles of roads within the boundaries of the park, 27 miles of these roads are classified as public use park roads. These roads were constructed in the 1930s to provide visitors an opportunity to see the battlefields and the 38 miles of earthworks in the park. Parking areas were later installed to facilitate access to prominent sites along these roads and at designated stops along the park's driving tour.

In 2019, over 900,000 people visited the park and used the park roads. Increasing visitor-use and traffic strains the efficiency and carrying capacity of many of the park roads. Today, many of the roads are in need of attention and maintenance. Moreover, in the last ten years, the park has seen a steady increase in use of the park by recreational visitors. As a consequence, the designated parking areas frequently experience overflow problems and visitors are forced to park along road shoulders and other non-designated locations. The park plans to rehabilitate and preserve the park tours roads through applying a chip-seal coating to the road surface. The park has had success with this application at Lee Drive on the Fredericksburg Battlefield, Hill-Ewell Drive on the Wilderness Battlefield, and Slocum Drive on the Chancellorsville Battlefield.

The entrance road of the Stonewall Jackson Death Site is currently surfaced with exposed aggregate panels. This road will not receive a chip seal/micro surface overlay. Simply the existing joint filler between the panels will be removed, the joints cleaned of dirt and loose debris, backer rods installed and and the joints filled with an elastomeric sealant.

The work will be performed on three battlefield units and two other units in the park:

All work will be performed by contract labor. The contractor will prepare the park's roads and parking lots surfaces by sealing cracks and patching holes. Chip Seal/Micro Surfacing material will be applied to all the roadways. The parking areas will be re-striped. Approximately 3/4 inch to 1 inch of pavement overlay will be completed on the paved roads and parking lot areas to preserve the current pavement. All roads, parking lots, crosswalks and currently marked striping will be redone after the pavement overlay is completed.

Performing preservation of the pavement areas will extend the life of the asphalt and maintain it in good condition. The roads are access routes in and out of public use areas of the park. It is important that we protect these park resources as they are vital to the park's everyday functions. If the asphalt is not maintained, it will begin to deteriorate leaving dangerous potholes and cracks for visitors.