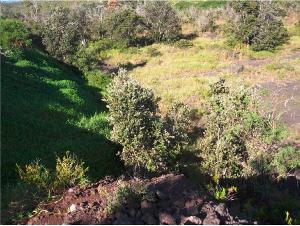 The former Quarry Firing Range (QFR, the Site) is located within Hawai'i Volcanoes National Park (HAVO), which is owned by the United States and managed by the National Park Service (NPS). The Site is being investigated under the Comprehensive Environmental Response, Compensation, and Liability Act (CERCLA). NPS is the lead agency under CERCLA at the former QFR because the Site is under the jurisdiction of NPS.

The Site is located on the southeast flank of Mauna Loa volcano on the Island of Hawai'i, approximately 10 miles south of HAVO headquarters. It is situated in an abandoned quarry about 260 feet west of Highway 11. Use of the former quarry as a firing range reportedly began in 1940; the Site was used in this capacity until 1982.

Previous investigations, including a Preliminary Assessment, a Site Inspection, and a Supplemental Site Inspection, were conducted at the Site from 2013 to 2017. Results of the investigations indicated that a thin layer of soil (approximately four inches or less) covered the underlying basalt bedrock; bullets and bullet fragments were observed within the soils surrounding the former backstop, firing line/lanes, and other related areas that were sampled as separate decision units (DUs), or sub-DUs. Lead, antimony, and copper were determined to be contaminants of potential concern. Potential human receptors include Site workers and recreational users; potential ecological receptors include plants, soil invertebrates, birds, and mammals, including several protected wildlife species: the Hawaiian hoary bat, Hawaiian goose, Hawaiian short-eared owl, and Hawaiian hawk.

Removal action objectives were developed and include eliminating or reducing to the extent practicable levels of lead and antimony in specific areas as outlined in the Engineering Evaluation and Cost Analysis (EE/CA) Report. An Action Memorandum will follow the public review of the EE/CA and will serve as the decision document for selecting the Non-Time Critical Removal Action.