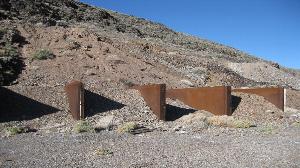 Tucki Mine is located along the edge of a steep-sided wash. The wash slopes to the east for a half mile before continuing down a series of dry falls and onto an alluvial fan that comes out 3.5 miles west of Furnace Creek. The Site is located in Death Valley National Park and Inyo County, California, on the southeast slope of Tucki Mountain in the Panamint Range. The Site is located 10.5 miles south of Stovepipe Wells and 12 miles west of Furnace Creek. It is accessed from Emigrant Canyon Road via a 10-mile rough 4x4 road in Telephone Canyon.

The mines and mill site cover nearly three acres, with the bulk of the operation located on the south side of the wash. During operation the cyanide processing plant consisted of four steel-lined, concrete block tanks, two water reservoirs, crushing equipment, and a pump. Today only the concrete tanks remain. The rest of the processing setup was removed after the Site shut down in the early 1980s.

Tucki Mine was first claimed in 1909 by Henry W. Britt, and changed hands and was leased several times. There is no record of significant activity in the mine's early decades. In the 1930s, ore was processed off-site, but a mill using cyanide began at the Site in 1940. The mine produced $846 of gold per two weeks in 1940. The mine was dormant in the 1950s and 1960s. In the mid-1970s the mine operators constructed a gold recovery plant to use carbon filtration and sodium hydroxide (and later zinc) to leach oversized material from old tailing piles. Tucki Mine and Mill Site is no longer active.

The NPS estimates that less than 500 people visit the Site per year. Land uses are unlikely to change in the future.

The NPS is investigating and cleaning up the Site pursuant to CERCLA and the NCP. Congress enacted CERCLA, also known as Superfund, in 1980 to address releases and threatened releases of hazardous substances into the environment. CERCLA gives the President broad powers to respond to hazardous substance releases and threatened releases as the President deems necessary to protect the public health or welfare or the environment, including enforcement authority with respect to parties responsible for the releases. The President has delegated this authority to a number of federal departments and agencies, including the Department of the Interior. The NPS, an agency within the Department of the Interior, is the CERCLA lead agency for the Site.

To implement CERCLA, the U.S. Environmental Protection Agency (EPA) created the NCP, which is a set of regulations that detail how CERCLA cleanups are to be conducted, including requirements for community involvement activities. Different requirements apply to different types of response actions. A non-time-critical removal action is being conducted at the Site based on NPS's determination that a planning period of six months or more is available prior to the start of removal activities at the Site because no immediate threat to public health or welfare or the environment is present at the Site.

As part of the non-time-critical removal action, NPS is conducting an engineering evaluation/cost analysis (EE/CA) to evaluate associated potential risks to human health and safety and the environment, identify relevant cleanup requirements, develop a range of cleanup alternatives, and identify a recommended response action alternative for the Site.

A Preliminary Assessment (PA) was conducted in 2014 by Environmental Cost Management (ECM). The PA described the historical uses of the Site, current state of the Site, and approximated by visual means only the extent of various waste rock and mill tailings at the Site. As a follow-up to the PA, a Site Inspection (SI) was conducted by NOREAS, Inc. (NOREAS) in 2016. Soils are the primary media of concern at the Site. Therefore, soil samples were collected from three decision units (DUs) at the Site, including: the cyanide processing area (DU-1), fine-grained mine waste (DU-2), and background native soils (DU-3). The soil samples were analyzed for metals, cyanide, and pH. Also, select soil samples were analyzed for acid-base accounting (ABA), to determine the acid-generating potential of the soils.

A Conceptual Site Model prepared as part of the SI Report (NOREAS, 2016) illustrates the potential human and ecological exposure routes. The principal human exposure pathways are through dermal contact and inhalation of wind-blown material.
Based on the results of the soil samples from DU-1 and DU-2, concentrations of antimony, arsenic, cadmium, copper, lead, mercury, selenium, silver, and zinc were above the background concentrations in DU-3. Results of ABA testing of DU-2 soils indicated no net potential for acid generation.

The results of the SI soil sampling indicate that the Site contains metals in soil above local background concentrations, USEPA regional screening levels (RSLs) for residential soil, and the NPS ecological screening values (ESVs). The principal contaminant of concern at the Site is arsenic, detected in soil at significantly elevated concentrations compared with background levels.

The NPS is conducting an engineering evaluation/cost analysis (EE/CA) as part of a non-time-critical removal action to gather additional information. The NPS has determined that it has sufficient data from previous sampling efforts at the Site, so in this instance, the EE/CA process will not include additional site sampling. Existing data will be used to conduct risk assessments to evaluate human health and ecological concerns, and cleanup goals will be established. If cleanup is required, the EE/CA will also develop, present, and evaluate cleanup alternatives.