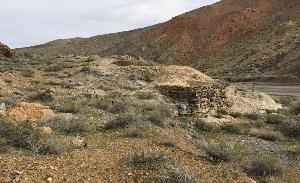 The Starr Mill Site is located in Death Valley National Park (DEVA), in an unincorporated area of Inyo County, California. The Site is located at approximately 4,000 feet above sea level and bound on the west by steep canyon walls and on the east by Emigrant Canyon Road and the eastern canyon wall. The entire Site covers an area of less than 0.5 acre. Starr Mill is about one mile north of the larger, more well-known Journigan's Mill, which is also adjacent to Emigrant Canyon Road.

Mr. Starr and Walter M. Hoover operated the Starr Mill for only a few months in 1935, using cyanide. They used the Site to process ore from Nemo Canyon. The Site was later cleaned up by National Park Service personnel (sometime prior to 1940).
The Site currently has concrete foundations from four cyanide tanks, stacked rock walls, and a mound of tailings on bedrock above the road.

There is no record of any claim being filed on the site. No new claims are allowed on the site, as it is federal land managed by the National Park Service. Land uses are unlikely to change in the future.

The NPS is investigating and cleaning up the Site pursuant to CERCLA and the NCP. Congress enacted CERCLA, also known as Superfund, in 1980 to address releases and threatened releases of hazardous substances into the environment. CERCLA gives the President broad powers to respond to hazardous substance releases and threatened releases as the President deems necessary to protect the public health or welfare or the environment, including enforcement authority with respect to parties responsible for the releases. The President has delegated this authority to a number of federal departments and agencies, including the Department of the Interior. The NPS, an agency within the Department of the Interior, is the CERCLA lead agency for the Site.

A Preliminary Assessment (PA) was conducted in 2014 by Environmental Cost Management (ECM). The PA described the historical uses of the Site, current state of the Site, and approximated by visual means only the extent of various waste rock and mill tailings at the Site.

As a follow-up to PA, a Site Inspection (SI) was conducted by NOREAS, Inc. (NOREAS) at the Site in 2016. Soils are the primary media of concern at the Site. Therefore, soil samples were collected from a single decision unit (DU) at the Site, consisting of the mill foundations and cyanide process area. In addition, a total of 3 discrete samples were collected from an area where eroded mill tailings appeared to have settled, ponded, or placed, located approximately ¾ of a mile north of the Site on the west side of Emigrant Canyon Road at the 5-Mile marker. The settlement/ponded area was approximately 5,000 square feet. The soil samples were analyzed for metals, cyanide, and pH. Also, soil samples were analyzed for acid-base accounting (ABA), to determine the acid-generating potential of the soils.

A Conceptual Site Model prepared as part of the SI Report (NOREAS, 2016) illustrates the potential human and ecological exposure routes. The principal human exposure pathways are through dermal contact and inhalation of wind-blown material.

The NPS is conducting an engineering evaluation/cost analysis (EE/CA) as part of a non-time-critical removal action to gather additional information. The NPS has determined that it has sufficient data from previous sampling efforts at the Site, so in this instance, the EE/CA process will not include additional site sampling. Existing data will be used to conduct risk assessments to evaluate human health and ecological concerns, and cleanup goals will be established. If cleanup is required, the EE/CA will also develop, present, and evaluate cleanup alternatives.