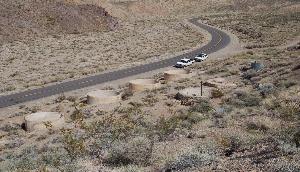 The Site includes the largest ruin of an amalgamation and cyanide plant of the 1930s-1950s period left within the Park. In 1937, Roy Journigan built an amalgamation and cyanide plant on the Gold Bottom Mill property, known as Journigan's Mill. Water to power the mill was obtained from the Green, Burro, Willow, and Burns Springs. Prior to construction of the 1937 mill, one or possibly two smaller mills were located at the Site. The Site contains a wooden floor platform, two concrete housing foundations, and the foundations to the mill which are divided into three levels. The mill components also include several tanks that were used to support the cyanide operation. Mill tailings are situated around the mill foundations, in most of the tanks, near the foundations of former buildings, and in stockpiles at the Site.
The ruins at the Site are not substantial. However, the highly visible location adjacent to the paved Emigrant Canyon Road attracts visitors, including many who are unfamiliar with mining, milling, and the associated hazards.

On January 23, 1980, the Journigan Mill was nominated to the National Register of Historic Places (HT0001, pdf p. 2). In 1981, the Journigan's Mill ruins were considered to be eligible for inclusion in the National Register of Historic Places due to their local significance. The Site had the longest contiguous usage of a site for milling-related activities within the Death Valley National Monument. It was the largest and "best-equipped" mill in the Wildrose area (NP0003, pdf p. 5). Concrete ruins at the Site were described as being in "good shape" and not requiring stabilization work (NP0003, pdf p. 5).

A Preliminary Assessment (PA) was conducted in 2014 by Environmental Cost Management (ECM). The PA described the historical uses of the Site, current state of the Site, and approximated by visual means only the extent of various waste rock and mill tailings at the Site.
As a follow-up to the PA, a Site Inspection (SI) was conducted by NOREAS, Inc. (NOREAS) at the Site in 2016. Soils are the primary media of concern at the Site. Therefore, soil samples were collected from seven areas, referred to as decision units (DUs) at the Site, including: the cyanide processing area(DU-1); mill foundations (DU-2); mill tailings large bermed stockpile (DU-3); southern mine waste stockpile (DU-4), eroded mill tailings in northern wash (DU-5); eroded mill tailings in southern wash (DU-6); and background soils for comparison (DU-7). The samples were analyzed for metals, cyanide, and pH. Also, select samples were analyzed to determine their potential acid-generating ability (ABA).

The NPS is conducting an engineering evaluation and cost analysis as part of a non-time-critical removal action to gather additional information to fully characterize the nature and extent of Site contamination. The EE/CA process will include additional site sampling to further understand the impacts of the previous mining and milling activities at the Site. Risk assessments will be conducted to evaluate human health and ecological concerns, and cleanup goals will be established. If cleanup is required, the EE/CA will also develop, present, and evaluate cleanup alternatives. As part of the alternatives development and evaluation process, NPS will consider the requirements of Section 106 of the National Historic Preservation Act, among other relevant requirements.