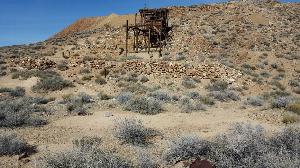 Cashier Mill is located adjacent to Eureka Mine,located 17 miles south of Stovepipe Wells, California, in the Panamint Mountains (Latitude: 36.3615°, Longitude: -117.1107°) at an elevation of approximately 5,100 feet above sea level. The Site is accessed via the paved Emigrant Canyon/Wildrose Canyon Road, then 1.5 miles on the graded Aguereberry Point Road.

The NPS is investigating and cleaning up Cashier Mill Site pursuant to CERCLA and the NCP. Congress enacted CERCLA, also known as Superfund, in 1980 to address releases and threatened releases of hazardous substances into the environment. CERCLA gives the President broad powers to respond to hazardous substance releases and threatened releases as the President deems necessary to protect the public health or welfare or the environment, including enforcement authority with respect to parties responsible for the releases. The President has delegated this authority to a number of federal departments and agencies, including the Department of the Interior. The NPS, an agency within the Department of the Interior, is the CERCLA lead agency for the Site.

To implement CERCLA, the U.S. Environmental Protection Agency (EPA) created the NCP, which is a set of regulations that detail how CERCLA cleanups are to be conducted, including requirements for community involvement activities. Different requirements apply to different types of response actions. The NPS has determined that a non-time-critical removal action (NTCRA) is appropriate for the Site.

The Cashier Mill Site consists of the remains of former gold processing mill operations. The Site is situated on the southeastern side of Providence Ridge, an east-west-trending hill standing approximately 200 feet above a wide valley. Gold ore supplying the mill was taken from the Cashier and Eureka Mines, located in the extreme northeastern extent of the ridge. An entrance to the Eureka Mine is found upslope of the mill ruins. Approximately 100 cubic yards of pink sand-size tailings is present in the vicinity and downslope of the mill foundation where cyanide and mercury processing took place. A separate tailing deposit is present upslope of the mill site. Mine waste is present on the hillside to the west and south of the mill ruins. Many foot paths intersect the tailing deposits in the mill and mine areas.

Initially, a five-stamp amalgamation and concentration mill was built at the Site by the Cashier Gold Mining Company, and began operating in the summer of 1909. The Cashier Gold Mining Company also constructed a 7-mile pipeline to obtain water for the mill. In 1915, a five-stamp mill and cyanide plant was installed on the Cashier Mine property, either to replace the previous mill or because the previous mill was insufficient for the workload. In 1926, the Cashier Mill was listed as idle and was assumed closed, although mining in the area continued intermittently through the 1950s.

A Preliminary Assessment (PA) was conducted in 2014 by Environmental Cost Management (ECM). The PA described the historical uses of the Site, current state of the Site, and approximated by visual means only the extent of various waste rock and mill tailings at the Site.

As a follow-up to the PA, a Site Inspection (SI) was conducted by NOREAS, Inc. (NOREAS) at the Site in 2016. Because soils are the primary media of concern at the Site, soil samples were collected from five areas, referred to as decision units (DUs) at the Site. Those areas included the mill foundation area (DU-1), mill tailings in the east drainage (DU-2), mill tailings in the west drainage (DU-3), mine waste stockpiles (DU-4), and background native soils for comparison (DU-5). Mine waste stockpiles are scattered in several areas at the Site. In addition, surface water observed in the DU-1 mill foundation area, the result of an overnight rain storm, was collected for sampling. The samples were analyzed for metals, cyanide, pH, and for their acid-generating ability.
The samples from DU-1 through DU-4 showed elevated levels of antimony, arsenic, barium, beryllium, cadmium, copper, lead, mercury, molybdenum, silver, and zinc compared to the background concentrations in DU-5. Lead, arsenic, mercury and zinc were detected at significantly elevated concentrations in samples from DU-1 through DU-4, compared with background. Testing of samples indicated no net potential for acid generation.

The NPS is conducting an engineering evaluation and cost analysis as part of a non-time-critical removal action to gather additional information to fully characterize the nature and extent of Site contamination. The EE/CA process will include additional site sampling to further understand the impacts of the previous mining and milling activities at the Site. Risk assessments will be conducted to evaluate human health and ecological concerns, and cleanup goals will be established. If cleanup is required, the EE/CA will also develop, present, and evaluate cleanup alternatives. As part of the alternatives development and evaluation process, NPS will consider the requirements of Section 106 of the National Historic Preservation Act, among other relevant requirements.