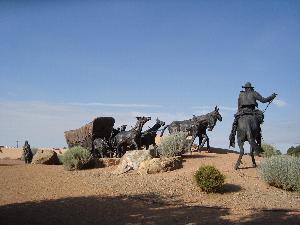 The National Park Service is starting the process of preparing a Foundation Document for planning and administration for the Santa Fe National Historic Trail. The public is invited to join in this effort.

The National Park Service invites you to play a role in charting the trail's future by sharing your thoughts on what is most important about the Santa Fe National Historic Trail, and to help identify its most pressing threats and its greatest opportunities. Trail staff will take your thoughts and feedback into consideration as they prepare the Foundation Document.

You may submit your feedback here from September 20, 2019 to October 20, 2019 by responding to five questions about the trail's significance, threats, and opportunities.

From 1821 until 1846, the Santa Fe Trail was a two-way international commercial highway used by both Mexican and American traders between Missouri and Santa Fe, New Mexico. Shortly after the Mexican-American War began in 1846, America's Army of the West followed the Santa Fe Trail westward to successfully invade New Mexico. After the war's end in 1848, the Santa Fe Trail became a national road connecting the more settled parts of the United States to the new southwest territories. In 1866, an unprecedented period of railroad expansion began in the new state of Kansas. In February 1880, the railroad reached Santa Fe, and the trail faded into history. Today, the Santa Fe National Historic Trail extends 1,203 miles across Missouri, Kansas, Oklahoma, Colorado, and New Mexico.

The National Park Service administers the Santa Fe National Historic Trail in partnership with other federal, state, and local agencies; non-profit organizations; private landowners; and others. The National Park Service's role includes providing leadership for the trail and setting best practice standards for all partners involved with administration and on-the-ground management of the trail and trail resources.