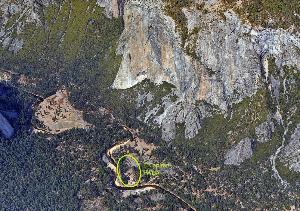 The El Capitan Former Waste Disposal Area (the site) is located in Yosemite Valley, within Yosemite National Park. The Site is being investigated under the Comprehensive Environmental Response, Compensation, and Liability Act (CERCLA) for potential cleanup of hazardous waste. Congress enacted CERCLA, also known as Superfund, in 1980 to address releases and threatened releases of hazardous substances into the environment. The El Capitan site is located south of the El Capitan picnic area and Northside Drive, adjacent to the Merced River. The site covers approximately 64,000 square feet. Waste is exposed discontinuously on the surface, including in an eroding cutbank along the river. The area is currently undeveloped with the exception of the Valley Loop Trail that crosses the site.

The Site was used for waste disposal from 1905 (or earlier) into the 1930s. The types of debris observed likely originated from the hotels and camps active in the Yosemite Valley at the time, as suggested by the manufacturing dates on materials and types of materials recovered during excavations. Waste debris includes domestic trash, glass, ceramics, automotive machinery and related wastes, paint cans, 55-gallon drums, and a layer of burned material likely resulting from regular on-site burning.

The historic use of the site as a dump left behind hazardous materials and the NPS investigated the site to evaluate cleanup options, pursuant to CERCLA. NPS is the lead agency under CERCLA, and the investigation is subject to an agreement between the California Department of Toxic Substances Control (DTSC) and the U.S. Department of the Interior (USDOI), NPS. NPS retained CDM Federal Programs Corporation (CDM Smith) to perform an investigation/study at the site and prepare an Engineering Evaluation/Cost Analysis Report (EE/CA).

In 2015, a sampling and analysis plan (SAP), site-specific health and safety plan, and community involvement plan were prepared and a geophysical survey of the site was performed, using vertical magnetic gradient, electromagnetic terrain conductivity and ground-penetrating radar. The geophysical survey revealed larger areas of subsurface waste than previously identified, expanding the study area. Sediment and porewater sampling via X-ray fluorescence were performed to delineate an area with elevated concentrations of lead.

In 2016, a second round of geophysical survey occurred to delineate boundaries of subsurface waste and an amendment to the SAP was prepared and implemented. A combination of test trenches and test pits were excavated to delineate boundaries of subsurface waste. Concurrently, historical archeological data recovery measures were performed to avoid adverse effects to archeological resources.

The investigations found contaminants of concern, including metals, hydrocarbons, and dioxins in the waste material, adjacent soil, and groundwater. Exposure risk is low for humans and low to moderate for ecological receptors.