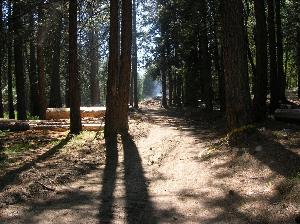 The Cascade Creosote Dip Tank Site (Site) is located in Yosemite Valley, within Yosemite National Park. The Site is being investigated under the Comprehensive Environmental Response, Compensation, and Liability Act (CERCLA) for potential cleanup of hazardous waste. Congress enacted CERCLA, also known as Superfund, in 1980 to address releases and threatened releases of hazardous substances into the environment. The Site is located on the western side of the Sierra Nevada Range in central California, approximately 3.3 miles southwest of Yosemite Village and immediately west of El Capitan Meadow along Northside Drive. The Site is flat, devoid of vegetation, and relatively small (about 1,000 square feet). The closest drinking water wells are approximately 3 miles upgradient - east of the Yosemite Lodge (CDM Smith 2015).

The Site was formerly a Civilian Conservation Corps (CCC) camp where wood was treated with creosote and possibly other wood treatment products. The CCC constructed a creosote dip tank at the camp in the early 1930s and it was used to treat wood for construction of back-country bridges through the 1970s. It was said to be constructed of concrete (3 feet wide, 10 feet long, and 3 feet deep) and was partially filled with creosote. Wood was placed in the tank to soak. After treatment, the wood would be loosely stacked and allowed to drip before being used. Thus, a store of treated wood was kept on hand and the wood was less "messy" to handle. The creosote may have been stored at the Site at some point; however, no record of a drip or storage area is available.

The historic use of the site as a creosote dip tank left behind hazardous materials and the NPS investigated the site to evaluate cleanup options, pursuant to CERCLA. NPS is the lead agency under CERCLA, and the investigation is subject to an agreement between the California Department of Toxic Substances Control (DTSC) and the U.S. Department of the Interior (USDOI), NPS. NPS retained CDM Federal Programs Corporation (CDM Smith) to perform an investigation/study at the site and prepare an Engineering Evaluation/Cost Analysis Report (EE/CA).

In 2015, a sampling and analysis plan (SAP), site-specific health and safety plan, and community involvement plan were prepared. The SAP was implemented in November 2015 to answer the principle investigation questions posed by the data quality objectives process within the SAP. Soil trenching and borings were sampled to determine the nature and extent of soil contamination from the source area to soils immediately adjacent and downgradient. Due to seasonally low groundwater levels, only one monitoring well (MW-1) was installed downgradient of the site during the 2015 fall mobilization.

During February and March 2016 MW-1 was sampled. In July 2016, two additional groundwater monitoring wells (MW-2 and MW-3) were constructed and developed—one downgradient and one upgradient of the Site. A second round of groundwater sampling (two events) was conducted in July and August 2016 for the three monitoring wells. A third round of sampling was conducted in January 2017. It was determined by the contractor that the data quality objectives for groundwater sampling had been met and no additional sampling was necessary.

Based on the results from the soils and groundwater data at the Site, CDM Smith finalized a Technical Memorandum in 2017, offering recommendations on the level of risk evaluation necessary for the Site.

In May 2018, additional soil sampling using ISM was conducted to further investigate dioxin/furan contamination within DU-2, which was previously sampled as part of the 2015 investigation. As part of the investigation, DU-2 was divided into three sampling units (SUs): SU-1, SU-2, and SU-3 (Figure 4). Surface ISM samples were collected at SU-2 and SU-3, and a subsurface ISM sample was collected at SU-2 and analyzed for dioxin/furans. No sampling was conducted for SU-1 as part of this investigation, as it is assumed soils in SU-1 are likely to be contaminated to a depth of up to 4 feet due to the proximity to DU-1. Further information regarding the SUs can be found in the SAP Amendment.

The media of concern at the Site are soil and groundwater. Site investigations have
shown the presence of PAHs, metals, total petroleum hydrocarbons (TPHs), semi-volatile
organic compounds (SVOCs), and dioxins/furans.