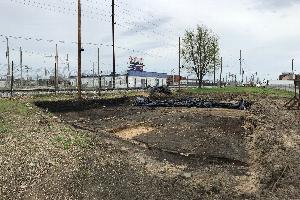 This reconnaissance survey evaluates an archeological site in Springfield, Illinois associated with the city's 1908 Race Riot. The survey was undertaken in response to a request from Illinois 13th District Representative Rodney Davis in October 2018.

The site at Madison Street and the 10th Street Rail Corridor contains the foundations of five houses burned in the 1908 Springfield Race Riot, an event which led directly to the founding of the National Association for the Advancement of Colored People (NAACP). The site contains artifacts from the houses that were burned and the people who lived there before the riot. Although there were dozens of race riots in America in the late 19th and early 20th century, few resources of this nature remain.

A reconnaissance survey provides a preliminary evaluation of whether a site could meet the criteria for inclusion in the national park system. Reconnaissance surveys examine the issues of national significance, suitability, feasibility, and level of NPS management required, and determine if further evaluation through a special resource study is warranted.

This project concluded that the archaeological site is likely to meet the criteria, and that additional study is warranted. A special resource study would further evaluate the site for inclusion in the National Park System; invite public involvement in the study process; and develop potential management alternatives for the site.

Thank you for your interest in the Springfield Race Riot Reconnaissance Survey.