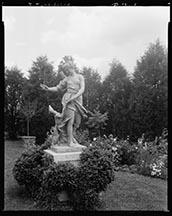 Fredericksburg and Spotsylvania NMP proposes to reinstall the Diana Statue at the east entrance of the Chatham walled garden and to move the Ceres Statue to a place on the upper terrace off the northwest corner of the main house.

In the most recent update to the National Register documentation for Fredericksburg and Spotsylvania NMP (FRSP), the Chatham Designed Landscape and Chatham Walled Garden are recognized as sites contributing to the park's eligibility. The garden statues, such as Ceres, Flora and Pan are listed as historic associated features.

The formal Chatham Walled Garden was established in the early 1920s by owners Daniel and Helen Devore. The statuary was added between 1921 and 1927, based upon recommendations by the garden's primary architect Ellen Biddle Shipman. Frances Benjamin Johnston's 1927 photos of Chatham provide solid documentation for many of the statues. While many pieces of the original statuary survive on the grounds of Chatham, others have disappeared. In the mid-1970s, the John Lee Pratt Estate auctioned off many pieces of the garden furniture, ornaments and statues. One large and prominent statue was removed from the grounds decades earlier, when the Pratts donated the statue "A Companion of Diana" to the Virginia Museum of Fine Arts (VMFA) in Richmond, Va.

The origin of the Diana Statue is uncertain, but it was installed with the other garden statuary during the 1920s, under the Devores' ownership. Unlike most of the other pieces, which were made of limestone, the Diana figure is made of terracotta and was originally painted white. The date of the statue is also uncertain, but is believed to be a copy of Rene Fremin's (1672-1744) "A Companion of Diana" by M. Fernandez French. It is possible that the statue was created in the 18th century, as the date 1717 appears on the base of the statue. The Diana statue originally stood upon a stone plinth at the eastern entrance to the garden wall. In 1959, John Lee Pratt donated the Diana statue to the VMFA. Following the removal of Diana, a limestone Ceres statue was relocated from elsewhere on the property and installed upon the empty plinth. The original location of Ceres is unknown, however it is speculated that it occupied the now-empty stone plinth at the northwestern end of the upper terrace on the west side of the main house. No historic photos of this plinth have been located to indicate what statue was originally located there, however the Ceres statue's original location at this plinth makes sense, as it would complement the Flora statue located across the upper terrace on an identical plinth at the southwestern end of the main house.

In mid-2017, the VMFA decided to deaccession the Diana statue and offered it to the NPS at Fredericksburg and Spotsylvania NMP. The park discussed the possibility of returning the statue to its original location at the entrance to the Chatham garden. An inspection of the statue revealed that it was not in a condition for outdoor display, as numerous cracks and damage was visible, as well as the protective paint had long since been removed. Working with the park staff, the Friends of Chatham engaged the services of a fine object conservationist who has begun the work to make the statue safe for outdoor display. When the conservation if completed, the park proposes to reinstall the Diana statue at its original Chatham location, on the plinth at the east entrance to the walled garden. This will also involve moving the Ceres statue to the vacant plinth in the northwest corner of the upper terrace on the west side of the main house.