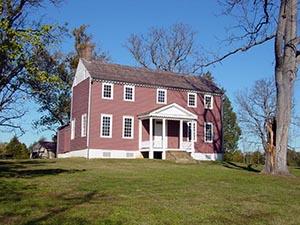 Fredericksburg and Spotsylvania NMP proposes to rehabilitate the visitor entrance to the Ellwood House Grounds and Cemetery Trail on the Wilderness Battlefield.

Beginning in 1998, Ellwood Manor was opened to the public seasonally. The site is staffed by the Friends of the Wilderness Battlefield (FoWB) annually between Memorial Day and Labor Day. Beginning in 2007, the interior of the building underwent extensive rehabilitation and both museum and interpretive exhibits were installed. In 2017, the public visitation to Ellwood was
6,503.

In 2010, the park completed a cultural landscape report (CLR) for Ellwood. The CLR's Recommended Task 15 (page 177) encouraged the removal of the 20th century cinder block garage once an alternative was found for storing the site's maintenance tools and equipment. The nearby Brooder Barn was chosen for that purpose and in 2016 the garage was removed and the area returned to turf. The 20th century wood fence that at one time spanned the space between the garage and the nearby Farm Office still stands. It is the park's plan to remove the fence, as it serves no purpose and present an odd appearance now that the garage is gone. The park signs near the fence will be removed and shifted back towards the parking area. Archaeological testing at the new sign location has already occurred and no artifacts or resources were discovered at that location.

The Ellwood CLR Recommended Task 22 (page 179) suggests that the park make the pedestrian path to the Jones-Lacy cemetery universally accessible. As it exists now, the path leads south from the house along a gravel walk lined by non-contributing boxwood hedges and then descends into the south fields, where the path is maintained as mown turf, by a set of wood steps. The steps are not accessible handicap visitors, which in turn makes the path not accessible. The park proposes to re-route the path from the house slightly to the west, thus taking advantage of the contours of the land, which will result in a more accessible path. The new path will be maintained as mown turf. The gravel path and steps will be removed, seeded and returned to turf.

The Ellwood CLR Recommended Task 14 (page 177) suggests that the park remove the non-historic garden that sits along the existing cemetery path to the south of the house. In making this recommendation, the CLR states: "The boxwood hedge may be retained to provide visual interest and define the walk to the Ellwood cemetery." While the park is not planning to remove the garden at this point, the proposed shifting of the cemetery trail negates the need to retain the boxwood hedges and the park proposes to remove them by cutting and grinding the stumps.

Overall, the above proposed changes will assist with pedestrian flow and accessibility issues.