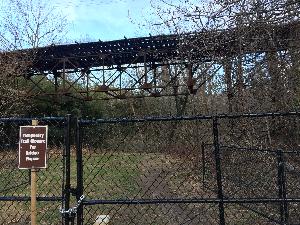 The National Park Service is reviewing a Special Park Use permit from the Washington Metropolitan Area Transit Authority (WMATA) to demolish the historic Foundry Branch Trestle Bridge in northwest Washington, D.C. The elevated railway bridge is owned by WMATA and is located within the boundary of Glover Archbold Park, which is federal park land managed by Rock Creek Park.

Built in 1896 for the Washington and Great Falls Electric Railway Company, the bridge was part of the streetcar line that connected Georgetown in the District of Columbia with Glen Echo, Maryland. Streetcar service continued through the first half of the twentieth century and eventually ended in 1960. That same year, D.C. Transit took over ownership of the bridge, but since the streetcar line was no longer in service, its condition languished in subsequent years. The structure is the last remaining streetcar bridge in D.C. The streetcar line is associated with the history of development of northwest Washington, D.C and the bridge is considered a contributing resource to the Glover Archbold Historic District, which is listed in the National Register of Historic Places.

In 1997, the U.S. Court of Appeals conveyed the several D.C. Transit assets to WMATA as part of a litigation settlement, including the Foundry Branch bridge. Today, the bridge is in a state of extreme disrepair. Due to its failing structural integrity, the National Park Service has closed off the area around the bridge, as well as the Glover Archbold Trail that goes beneath it.

WMATA currently proposes to completely raze the bridge and all associated infrastructure, including the concrete abutments. Park land would be used for staging equipment and materials, as well as for site access. Following demolition, the site would be restored to naturalistic conditions and the Glover Archbold Trail reopened.

The National Park Service will be posting documents concerning this project on this web site. Requests for additional information may be directed to the project contacts, listed below.