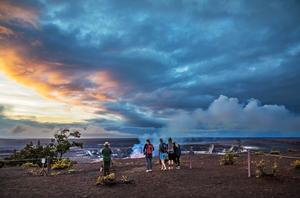 The public is invited to comment on a proposed fee increase from $30 to $50 for the Tri-Park Pass, an annual pass that allows visitors unlimited entry to the three fee-charging national parks in Hawai'i: Hawai'i Volcanoes and Haleakalā National Parks, and Pu'uhonua o Hōnaunau National Historical Park.

From mid-October through mid-December 2014 a public comment period was held for a previous increase to all recreation fees. Comments were gathered at visitor centers, online, and via postal mail and email. From June 1, 2015 through 2017, Hawai'i Volcanoes National Park entrance fees were raised incrementally each year in order to meet national standards for parks with similar visitor amenities. The per-person fee went incrementally from $5 (in 2015) to $12 in 2017. The motorcycle fee was raised incrementally from $5 (in 2015) to $20 in 2017. The per-vehicle pass was raised from $10 to $25 in 2017, but the tri-park pass only increased from $25 to $30 and was not in alignment with national standards.

The proposed Tri-Park Pass fee increase would be implemented starting May 1, 2018 and would ensure the Hawai'i parks have the same pricing structure as other national parks with similar visitor amenities.