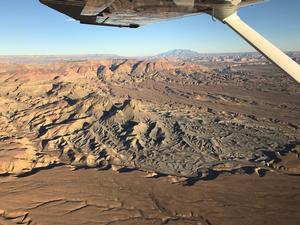 The Federal Aviation Administration (FAA) and the National Park Service (NPS) announce the availability of the draft voluntary agreement for commercial air tour operations at Glen Canyon National Recreation Area and Rainbow Bridge National Monument (Agreement). The Agreement will be available for public review and comment from Wednesday, December 13, 2017 through Friday, January 26th, 2018.

The FAA Modernization and Reform Act of 2012 allows the FAA and NPS to enter into a voluntary agreement with commercial air tour operators as an alternative to an Air Tour Management Plan. A voluntary agreement manages commercial air tour operations over the national park unit and addresses management issues necessary to protect the resources and visitor use of the park without compromising aviation safety or the air traffic control system. The FAA and NPS have decided to pursue voluntary agreements, as an alternative to an ATMP, at Glen Canyon National Recreation Area and Rainbow Bridge National Monument.

The voluntary agreements establish conditions for the conduct of air tours over the Park. These conditions include routes and altitudes, number of operations, type of aircraft, hours of operations, and reporting requirements.