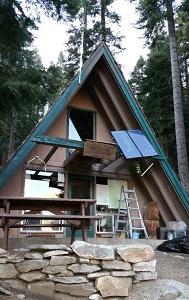 The proposed project, if approved would take place in early fall of 2018, after the Bearpaw High Sierra Camp has closed for the season. The current ranger station, a 480 square foot 'A-frame' serves as a base for wilderness operations and management along the High Sierra Trail. The station would be deconstructed and removed from the park with materials being recycled to the extent practicable. The current cabin has been determined to be a non-contributing structure in the Determination of Eligibility for the Bearpaw High Sierra Camp Historic District.

The proposed new ranger station, would be constructed of traditional log walls with a 12/12 pitched conventional roof. The walls would be log to blend with the other historical structures in the area and would be designed to be animal proof and low maintenance with secure and adequate storage. The project would include built-in storage cabinets to accommodate equipment and necessary supplies for ranger activities. Solar panels, wiring, battery, inverter, and two lamps would be replaced as part of project.

This project is part of the implementation of the Sequoia and Kings Canyon National Parks Wilderness Stewardship Plan, approved in 2015.

The NPS is interested in any public concerns, potential issues, or opportunities related to the proposed project. After analyzing comments received during scoping, the NPS will determine the level of analysis needed.