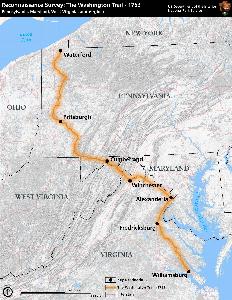 This reconnaissance survey is a preliminary assessment for inclusion into the National Trails System of the route associated with George Washington's journey from Williamsburg, Virginia to Fort LeBeouf (in present-day Waterford, Pennsylvania) and return between October 31, 1753 to January 16, 1754. The purpose of Washington's journey was to deliver a letter from the Governor of Virginia to the senior French officer in the region demanding that the French forces leave the Ohio Valley, and to make detailed observations of the strengths of the French and opportunities for the British to effectively counter them, including strengthening alliances with the local tribal leaders.

In this preliminary assessment, the Washington Trail - 1753, appears likely to meet only one of the three mandatory criteria established for National Historic Trails by the National Trails System Act of 1968. Therefore the NPS cannot recommend that a National Historic Trail feasibility study be authorized by Congress.

The first, Criterion A, is that it must be a trail or route established by historic use and must be historically significant as a result of that use.Based on this preliminary evaluation, a NHT study would likely find that the route and associated resources would not meet the first criterion as established by Washington's use from October 31, 1753, to January 16, 1754. Most, if not all, of the route from Williamsburg to Fort LeBoeuf had been established and used for similar purposes; therefore, Washington's journey
did not establish a new use for the route.

The second, Criterion B, states that a trail must be of national significance with respect to any of several broad facets of American history, such as trade and commerce, exploration, migration and settlement, or military campaigns. Preliminary analysis of this criterion indicates that The Washington Trail - 1753 as a whole is unlikely to be found nationally significant with respect to the three themes selected for study: Peopling Places, Shaping the Political Landscape, and Changing Role of the United States in the World Community. Select locations along the route may be associated importantly with the lives of persons nationally significant in the history of the United States under those themes, but the route of Washington's journey is likely not.

The third, Criterion C, states that a trail must have significant potential for public recreational use or historical interest based on historic interpretation and appreciation. Preliminary analysis found that The Washington Trail - 1753 survey area contained an extensive array of historic, educational, and recreational resources and opportunities directly related to Washington's journey, and would likely meet this criterion if a NHT feasibility study were to be authorized by Congress.

In conclusion, since the survey area is unlikely to meet two of the three Congressionally mandated criteria to be eligible for designation as a National Historic Trail, the NPS does not recommend that a NHT feasibility study be authorized.