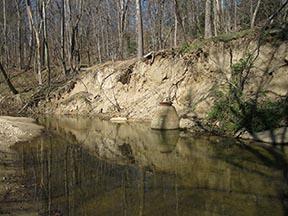 Hazel Run, which forms a boundary of the National Park Service lands at the Fredericksburg Battlefield, and west of the Fredericksburg National Cemetery, is changing course and causing significant erosion to the left bank of the stream. As a result, an existing underground city sewer line is now exposed. A manhole access that was once situated in the bank is now exposed in the stream. Without intervention, continued erosion is likely to occur, thus putting the sewer line at great risk for destabilization, damage and possible destruction. Also, additional erosion could affect park lands to the east, lands that contain historic and significant archaeological resources. In order to protect the existing sewer line and arrest erosion, the park is proposing to allow the city of Fredericksburg to stabilize the left bank of Hazel Run and install measures to divert the course of the stream back toward the middle of the stream's channel.

Under the guidelines of Section 106 of the National Historic Preservation Act, FRSP is soliciting public comments on this project. Written comments, either through this website or via postal letter, will be accepted only during the 30 day public review period.