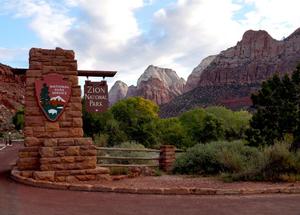 Recent increases in visitation to Zion Nation Park (ZION) has intensified the strain on existing park-infrastructure and has resulted in prolonged visitor wait times to enter the park, particularly at the south entrance. The South Entrance Monument, a park feature favored by millions of visitors, predominantly depicts the southern boundary of the park and is currently positioned immediately along the eastern side the roadway. The current location of the site forces visitors stopping to view the monument to congregate in the roadway which presents a safety hazard to pedestrians and further delays traffic entering the park.

The proposed project would shift the monument approximately 28 feet east from its original location but would remain in-line with the park boundary. The monument would also be stabilized with the addition of an underground concrete footing and the wooden pole and sign would be reoriented to reflect the historic arrangement. A monument plaza would be installed around the relocation site as well as a walkway on the eastern edge of the monument parking area to provide a pedestrian-friendly area outside of the vehicle entrance corridor and to facilitate universal accessibility to view the monument up close. A seatwall would also be incorporated into the design of the plaza to enhance visitor comfort. The monument parking area, directly south of the park boundary, would be restructured by moving the existing traffic median east, providing additional space for vehicles to enter the park. The existing parking area would be reconfigured to allow for a monument parking exit lane and parallel parking spaces bordering the pedestrian walkway.

To reduce impacts on traffic flow into ZION, the proposed project is expected to coincide with a larger Utah Department of Transportation (UDOT) reconstruction project of State Route 9. The UDOT State Route 9 project that would include resurfacing and other types of road improvements from the Town of Rockville, through Springdale and ending at the South Entrance to the Park. The ZION portion of the proposed project would take place outside of the peak visitation season (late spring to early fall) and is expected to take 60-90 days to complete. The area would be closed to visitors during construction and would employ a variety of heavy machinery normally associated with earth moving and road construction (excavators, backhoes, pavers, and material delivery trucks). Proposed construction would occur within a previously disturbed area. Historic material would be salvaged and reused to the extent possible and any new construction would be designed to blend with existing structures and/or landscape through the use of similar architectural features, materials, and color. Native revegatation efforts would also take place post-construction.

There are two formal opportunities for the public to comment on this EA process: during the initial project scoping and again following release of the EA document. You are invited to participate in this process by voicing your ideas, suggestions, or concerns related to the proposed project. These comments will be considered during preparation of the EA and subsequent planning.