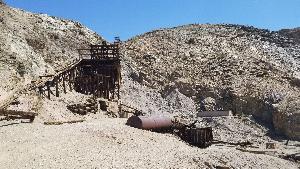 The National Park Service (NPS) seeks to evaluate the potential for release of hazardous constituents related to historical operations and waste management activities at the Keane Wonder Mine (Keane Site) in Death Valley National Park (DEVA). The Keane Site is a historic mining site located at the western slope of the Funeral Mountains in the Amargosa Range, on the eastern side of Death Valley.

From March 2007 to April 2008 the U.S. Department of the Interior Office of Inspection General conducted site inspections at numerous abandoned mines throughout California, Arizona, and Nevada to assess the public health and safety risks associated with the abandoned mines. The Keane Site was identified as a site where physical and environmental risks to the public exist.

In April 2008 DEVA employees used X-ray fluorescence technology to collect in-situ screening data for metals at two locations within the Keane Site. Citing both environmental concerns and the presence of physical and structural hazards at the mine site and surrounding area, Park officials closed the Keane Site area to the public and non-essential employees in 2008 to ensure public safety.

Between March 2010 and April 2011, the NPS completed extensive mitigation of all identified physical hazards at the Keane Site. The 2009 American Recovery and Reinvestment Act provided funds for mitigation of the mine safety hazards associated with the abandoned mine features and stabilization of the tramway.

In 2014, the NPS contracted with Environmental Cost Management, Inc. (ECM) to conduct a Preliminary Assessment (PA) at the Keane Site. The PA assessed threats posed to human health and the environment with respect to waste generated at the Keane Site including tailings resulting from milling of gold ore and subsequent cyanide and mercury processing activities. ECM's PA recommended additional investigation at the Keane Site consisting of soil sampling at selected locations around the mill tailings and ground water samples collected from the onsite well and nearby spring for background.

In 2015, the NPS contracted with ECM to conduct a Site Assessment at the Keane Site. As of April 2015, the Draft SI Report documents activities, results, conclusions, and recommendations with respect to metals and cyanide impacts from historic milling operations at the Keane Site and identifies concentrations of constituents of potential concern in soil and tailings that may pose threats to human health and the environment.

Keane Wonder Mine and Mill reopened to the public in November 2017, after the aerial tram structures were stabilized and mine entrances were gated.

In anticipation of potential actions that may be required in order to mitigate potential threats to human health and the environment at the Keane Site, the NPS is moving forward with a Comprehensive Environmental Response, Compensation, and Liability Act (CERCLA) response action of a non-time-critical removal action. This project addresses the need for an Engineering Evaluation/Cost Analysis (EE/CA), to be prepared by a selected contractor in order to evaluate removal action options in terms of effectiveness in addressing risks to human and environmental exposure, implementability, and cost. Upon completion of the EE/CA, the NPS will publish a notice of availability and brief description of the EE/CA and provide reasonable opportunity for public comment. Written responses to substantive public comments will be required. The selection of an appropriate removal action will be documented in an Action Memorandum signed by the Superintendent.