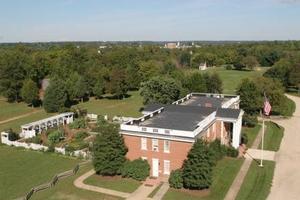 This undertaking is the National Park Service review of and proposed No Adverse Effect Determination for the following work items, described more fully on the attached pdf of the Assessment of Actions Having an Effect on Historic Properties, and its accompanying document files: (a) an Interpretive Building representing the known and extrapolated appearance of George Washington's Boyhood Home during his occupancy of that building in 1738-1753, (b) features composing a Core Interpretive Landscape, (c) a Mechanical Shed, (d) a Maintenance and Operations Building, (e) a system of stone-dust surfaced walks, (f) an asphalt-surfaced connector road, (g) an asphalt-covered parking lot, (h) an asphalt-covered emergency-exit road, (i) a turf-surfaced road extending west from the Connector Road, (j) a turf-surfaced road extending east from the Connector Road, (k) a gravel-surfaced, temporary construction-yard and temporary yard access-road, (l) a gravel-surfaced, temporary connector-road, (m) three gravel-surfaced temporary parking-lot entrances, (n) a trunk-corridor of buried utility lines, (o) a corridor of buried utility lines extending to the interpretive structure, (p) a buried sewer pipe, (q) a gravel-surfaced sewer line access road, (r) two sediment traps, (s) three bioretention areas.

Since 2000, the NPS on behalf of the United States of America has administered a conservation easement over the 76-acre George Washington's Boyhood Home National Historic Landmark ("Ferry Farm"), owned by the George Washington Foundation ("the Foundation"). In the wake submitting for public- and consulting party reivew, and then, in 2014, signing a Finding of No Significant Impact ("FONSI") for the Preferred Alternative (Alternative D) of an Environmental Assessment for the Foundation's proposed Site Treatment Plan for Ferry Farm- -and in accordance with a 2011 Programmatic Agreement for that property's management- -the NPS now proposes a No Adverse Effect determination for the Foundation's plans and proposals to implement a Phase One of that Preferred Alternative.

The preamble of the 2000 easement acknowledges the following among the purposes of the easement: "to restore and perpetuate the historic scene and the historic archeological resources." The preamble of the 2011 programmatic agreement includes the same goal, specified as: "investigating, rehabilitating, and, where possible restoring the Washington-era landscape, developing public access and facilities, and installing interpretive media and other improvements for the benefit of the public." The FONSI describes the Preferred Alternative as "a rehabilitated landscape" that includes new buildings and access infrastructure such as walkways and a road, and also "a core interpretive landscape" containing "structures to demonstrate the 18th century plantation setting as authentically as possible...." This rehabilitated-landscape concept is derived from the Secretary of Interior's Guidelines for rehabilitating cultural landscapes, guidelines that include the concept of replacing missing landscape features with those of "compatible" or "reproduced" designs, as well as of adding infrastructure for new use, i.e. education and historical interpretation. Although the FONSI conveyed NPS approval, for the purposes and as the culmination of a National Environmental Policy Act (NEPA) review, of the Preferred Alternative and its general concept of a landscape rehabilitation, the FONSI was not the product of a Section 106 review. The NEPA-review documentation for the Preferred Alternative and the FONSI lacked much of the detail that is now supplied for the Section 106-review of the Foundation's proposed Phase One.

This Assessment of Actions initiates the Section 106 process for reviewing Phase One of the Preferred Alternative. Please contact Noel Harrison, below, for questions or to schedule review of hard-copies of the attached digital documents.