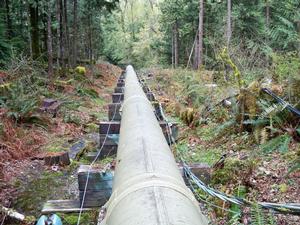 Introduction:
The National Park Service is conducting an Engineering Evaluation/Cost Analysis pursuant to the Comprehensive Environmental Response, Compensation, and Liability Act, for the Newhalem Penstock Site (hereinafter "Site"), Ross Lake National Recreation Area in Washington State. This EE/CA is being produced after a Time Critical Removal Action was completed at the Site in 2017 because data from site investigations show that some lead, arsenic, and CPAHs may remain within the surrounding area that are above the MTCA cleanup levels. Furthermore, additional site characterization is needed to determine if hazardous substances remain on site and if so, if they pose a threat to human health and the environment.

Background:
The Newhalem Penstock Site is located within Ross Lake National Recreation Area, directly across the Skagit River (on the south side) from Newhalem, Whatcom County, Washington. The aboveground portion of the penstock is located on a steep and somewhat rocky slope above the Newhalem powerhouse, and roughly 600 feet from the Skagit River where the diverted water of Newhalem Creek enters this tributary to Puget Sound. The Skagit River supports all five native species of salmon (including federally threatened Puget Sound Chinook salmon), as well as federally listed (threatened) Puget Sound steelhead and bull trout. An intermittent stream runs adjacent to the penstock, flowing down the slope to the powerhouse. Intermittent stream outflow enters the tailrace of Newhalem Creek and after passing over a fish barrier, discharges into the Skagit River. In August 2015, wildfires burned much of the surrounding area, including several of the wooden penstock saddle supports, reducing native vegetation and increasing runoff and the potential for erosion in the immediate vicinity. A trail system between the NPS Newhalem Campground (approximately one quarter mile west of the Site) and a footbridge leading to "downtown" Newhalem (approximately one quarter mile east of the Site) parallels the Skagit River immediately downslope from the penstock at the site of the Newhalem Powerhouse, and a steep trail leads up the slope past the powerhouse and upper sections of the penstock.

The Newhalem penstock is part of the Newhalem Creek Hydroelectric Project, operated by Seattle City Light (SCL) under a Federal Energy Regulatory Commission (FERC) license, which is comprised of a powerhouse, penstock, bedrock power tunnel, and creek diversion structure. The penstock was originally constructed by SCL in the 1920s as part of the power plant used during construction of the Gorge Dam and continues to convey water to the Newhalem powerhouse for power generation. The penstock is 1,122 feet long, approximately 904 feet of which is above ground. The remaining 218 feet is located within a bedrock tunnel. The aboveground portion of the 30- to 33-inch diameter penstock formerly rested on wood frame supports, or pedestals, with bases of wood and concrete, through 2017. Of the original penstock saddles, all 52 were made from treated wood. Several of these saddles were damaged in an August 2015 wildland fire (the Goodell Fire), and temporary supports were installed at four saddle locations as an emergency project to prevent the penstock from being damaged by buckling. SCL replaced all the saddles with cast-in-place concrete pedestals in 2016-2017. In the course of removing the saddles, approximately 171 tons of soil was also removed and disposed of offsite as contaminated soil.

The Newhalem penstock has been maintained by SCL to provide power generation for the residents of Newhalem since its construction in the 1920s. It is not known with certainty if sandblasting was used to remove old coats of paint, which may have contained lead, before repainting the penstock; however, no indications of sandblast grit have been observed at the site. Much sandblast grit used historically in the Puget Sound region was derived from slag and may have contained heavy metals including lead, arsenic, copper, and zinc. In addition, the original wood supports from the penstock may have been preserved with copper chromium arsenate (CCA), creosote, or pentachlorophenol, all of which were used historically to retard the growth of moss and fungi. If wood preservatives were used, these chemicals may have leached into nearby soil.

SCL has conducted two investigations in the project area to date. Soil sampling was conducted in August 2014 in the immediate vicinity of the penstock, and additional sampling was conducted in October 2015 to further evaluate the extent of soil contamination. Samples were also collected in April 2016 from the wood saddles to determine the specific type of preservative(s) in the wood. Results of the soil sampling indicate that soil in the vicinity of the penstock contains/contained levels of lead and arsenic above Washington State's Model Toxics Control Act (MTCA) cleanup levels. Wood sample analysis results indicate the wood was preserved with coal-tar creosote. In some locations, soil within approximately 2-3 inches of the wood saddles contained levels of carcinogenic PAHs (cPAHs) above MTCA cleanup levels.

Based on SCL's need to imminently replace the wooden saddles to ensure the ongoing operation of the Newhalem Hydroelectric Project and based on the results from the Site investigations, the NPS approved a Time Critical Removal Action at the Newhalem Penstock Site on September 1, 2016 that authorized the removal and disposal of contaminated soil excavated to complete the scope of work associated with SCL's project to replace the saddles along the penstock. Following this approval, SCL initiated a removal action of contaminated soils in October 2016 and completed the removal and overall saddle replacement project in September 2017.

Over the course of the 11 month project, with a three month hold on on-Site work due to winter rainy season (January-March, 2017), SCL excavated the soils around each saddle location (the amount depended on the depth of soil over bedrock and the total footprint required for construction of the new saddle), classified the material as RCRA Subtitle D non-hazardous material, packaged the soil in bags suited for contaminated material, transported the bags off Site via small trail toters, and disposed of the material at a USEPA-compliant landfill licensed to accept the material. Removal of all the wood saddles included removal of soil surrounding each saddle. Consequently, most of the cPAH-impacts from the saddles was likely removed by the saddle replacement project. Wood waste generated from saddles, designated as "state-only treated wood waste" and excluded from Dangerous Waste Regulations under Washington State Administrative Code (173-303-071(3)(g)(ii)), was disposed of in a municipal solid waste landfill permitted under chapter 173-351 of Washington Administrative Code.