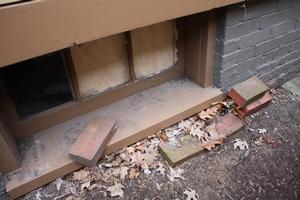 Three single pane windows were broken as the result of a break-in. The perpetrator used a loose brick located immediately outside the window near the NE corner of the Lincoln Home to smash one pane on the three-paned window but when he was unable to open the window far enough to slip inside, he moved the next window to the east and used the brick to smash a pane in that window, opened the latch and slipped inside. Springfield and park law enforcement rangers, including a K-9 dog, trapped the perpetrator in the basement after he set off alarms. In the meantime, he had flipped several breakers in an attempt to shut off the alarm. This caused the lights in the home to flicker briefly, alerting Springfield PD that he was still inside, and causing the back-up generator to activate. The shut-offs also affected the fire suppression system compressor, causing water in the system to begin emptying into the basement where the sump pump was also off, which caused minor flooding. At this point the perpetrator realized he was trapped and attempted to get out of the basement by breaking a third window pane, the second in the second window. He was caught by the K-9 dog and a Springfiled policeman.

Park maintenance staff cleaned up the water and reset all systems and temporarily blocked the broken windows with plywood. Curatorial staff removed the glass, which was initially determined to be modern glass based on the greenish-tint to the edges and the clarity and flatness of the glass. This project will complete the repairs to the windows. No other repairs have been necessary at this point.