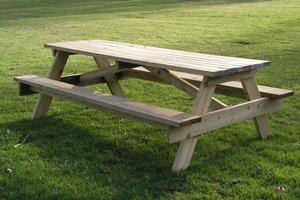 Since 1949, the National Park Service (NPS) had an agreement with the District of Columbia Department of Parks and Recreation (DPR) to manage the group picnic area reservations on NPS property at Rock Creek Park and Fort Dupont Park. DPR asked the NPS to assume the management of the reservation process for these NPS sites. The NPS moved the reservation process to Recreation.gov, a convenient website used by many national parks and thousands of park visitors across the country. The transition to Recreation.gov became effective March 1, 2014. We worked with DPR to ensure that the transition is a smooth one for all park visitors and Washington Area residents.

The reservation fee for a group picnic area had not changed since the early 1990's. In late 2013, the NPS proposed to bring the fee in line with the price for similar group picnic areas in the Washington Metropolitan Area, and provide options for full-day and half-day rentals. The proposal was to phase this increase over the next 3 years starting in the summer of 2014 with an increase to $25/half day. The NPS is now preparing to implement the second phase increase January 1, 2015, at $45/half day, followed by the third phase in 2016 at $65/half day. The additional revenue will improve the condition of the picnic areas and the level of service provided to visitors.