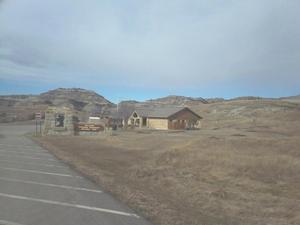 For the purpose of complying with the National Environmental Policy Act (NEPA), the National Park Service (NPS) has prepared an Environmental Assessment (EA) to replace the Theodore Roosevelt National Park (the Park) North Unit Visitor Center, which also contained administrative offices for the NPS. The now abandoned visitor center has settled substantially over the past 10 years to the point the building is not structurally safe.

Based on public comments from previously completed scoping efforts that expressed concern over building near an abandoned facility, the park developed an additional site location, Alternate Site 4. Unlike the abandoned visitor center that had a basement, the new visitor center would be a single story design of comperable size. Additionally, all four site locations will incorporate a deep pier system to mitigate the erosive and expansive soils of the region. Unlike the previously identified sites that are immediately east, west, and south of the abandoned visitor center, Site 4 is approximately 700 feet west. All four sites are on land classified as "Development Zone", so a new visitor center on any of the sites would be consistent with that land use.

Engaging our stakeholders is an important step in this process, and the NPS is now soliciting comments from the public, State, and Federal agencies regarding the adequacy of the EA and issues considered, the four build alternatives, and the expected impacts of each alternative on the park's natural and cultural resources. The NPS has not identified a preferred alternative. Your comments will be considered by the NPS and incorporated into the EA's decision document, a Finding of No Significant Impact.

After a decision is reached regarding what site to build on, tentatively expected by August of 2015, the NPS will complete the process of designing the visitor center itself and any associated structures.

The public comment period begins May 15th, 2015 and closes June 17th, 2015. Individuals and organizations needing additional time to comment may request an extension from the park superintendent. Comments may be submitted via this website (preferred) or by mailing the park Superintendent at P.O. Box 7, Medora ND 58645.