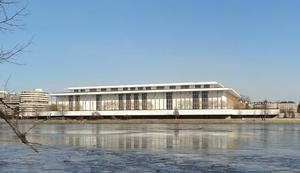 The National Capital Planning commission (NCPC) and the National Park Service (NPS), acting as co-lead agencies in cooperation with the Kennedy Center for the Performing Arts, are currently reviewing a proposed Kennedy Center expansion project. The purpose of the proposed expansion is to improve the facilities of the Kennedy Center by adding space for classrooms, rehearsal rooms, event spaces and offices in a dedicated area. The project is needed because the Kennedy Center, with the largest performing arts education initiative in the country, contains no dedicated classrooms, a limited number of rehearsal rooms, and no dedicated event space. The project partially falls within the Rock Creek and Potomac Parkway, which is under the jurisdiction of the NPS and managed by the National Mall and Memorial Parks. NCPC will be reviewing the project under its authorities in the National Capital Planning Act.

Under the proposal, the Kennedy Center would expand the south side of the Kennedy Center. As proposed, the project would include three pavilions. Two of the pavilions would be located on the south side of the Kennedy Center and would connect with the existing building underground and at grade via the main plaza. The third pavilion would be located across Rock Creek and Potomac Parkway, on a floating platform on the Potomac River. The third pavilion would provide space for an interactive family-oriented education facility for children to learn about and experience the performing arts. The project would also create a public waterfront connection and provide safe pedestrian access between the Kennedy Center and the Rock Creek and Potomac Parkway Trail along the riverfront.

In accordance with the National Environmental Policy Act (NEPA), the NPS and NCPC have prepared an Environmental Assessment (EA) to identify alternatives and assess the potential environmental impacts of the proposal. Concurrently, the agencies will conduct consultation under Section 106 of the National Historic Preservation Act (NHPA). Click on "Open for Comment" or "Meeting Notices" to the left for information about upcoming meetings and documents for review.