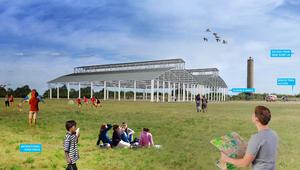 The National Park Service (NPS) is currently evaluating options for Hangar 38 at Miller Field, Staten Island, and is requesting public input and comments on the most appropriate solution and potential future uses for the site.

Hangar 38 History
Miller Field was established prior to World War I as part of a system of aerial coast defenses for New York City. Early in the military aviation period, Seaplane Hangar 38 was constructed at Miller Field in 1920 for the U.S. Army. During Miller Field's active use, there was also a landplane hangar (since demolished) of similar size that sat across the concrete apron from Hangar 38, as well as approximately 40 support structures. Hangar 38 remains significant as one of the last extant examples of its type remaining on the eastern seaboard.

Consisting of two adjacent hangar bays, the original building was extensively renovated in 1939 as a federal Works Progress Administration (WPA) project; the WPA work included replacing the hangar doors and a two-story addition on the west and one-story additions on the south and east sides of the hangar. Most of the remaining airfield buildings were demolished in the mid-20th century. While the housing at the north and east edges of the field also date from the military period, the hangar is the only building that retains historic integrity, and is the focal point of the Miller Army Airfield Historic District, which consists of Hangar 38, the Elm Tree Light to its southwest, and the concrete apron to the northeast. The loss of the remaining buildings and runway has eliminated the historic integrity of the rest of the airfield.


Hangar 38 Project Background:
Hangar 38 incurred substantial flood damage due to Hurricane Sandy, and, due to its location and low elevation, is extremely susceptible to damage from future storms. As part of Hurricane Sandy recovery efforts, Gateway National Recreation Area (Gateway) is evaluating the best solution for Hangar 38. Currently there are two options under consideration.

Options:
1. Demolition:
Under the Demolition option, Hangar 38 would be removed. Future plans for the area could include a variety of recreational and programmatic activities, consistent with the predominant use of Miller Field.
2. Partial Deconstruction:
Under the Deconstruction option, the walls will be removed, exposing the steel frame. Corrugated steel sheeting will remain as a partial roof. The intent of the 'deconstruction' option is to retain the overall form of Hangar 38 and some of its historic appearance, while providing a defined area for recreational and programmatic activities.

The National Historic Preservation Act requires federal agencies to take into account the effects their actions may have upon properties on or eligible for the National Register of Historic Places, like the Miller Army Airfield Historic District. Either of the two options under consideration would have an adverse effect on the hangar, meaning that the historic integrity of the building would be diminished. Gateway is consulting with the New York State Historic Preservation Office, but is also interested in your views. Please follow the link at left to tell us what you think. You may also send your comments to: